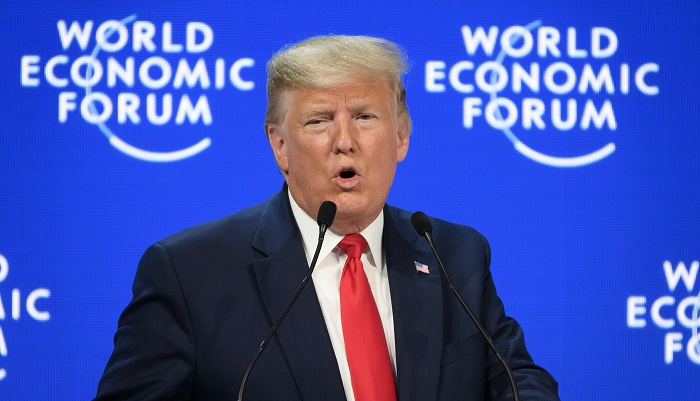 US President Donald Trump addresses the World Economic Forum at the congress centre in Davos, on Tuesday

Thunberg was in the audience in the Swiss Alps to hear a typically bullish speech by Trump, delivered just before the start of his Senate impeachment trial in Washington.

The 50th meeting of the World Economic Forum (WEF) got under way in the ski resort with an avowed focus on climate change but with starkly different visions over global warming laid bare.

"We must reject the perennial prophets of doom and their predictions of the apocalypse," said Trump, growling that "they want to see us do badly".

He claimed that "alarmists" had been wrong on previous occasions by predicting population crisis, mass starvation and the end of oil.

Trump branded those warning of out-of-control global warming and other environmental disasters "the heirs of yesterday's foolish fortune tellers".

Trump told reporters later that his Davos trip was devoted to meeting "the most important people in the world and we're bringing back tremendous business".

"The other's just a hoax," he said of the "disgraceful" impeachment trial.

'Nothing has been done'

Before Trump's appearance, Thunberg underlined the message that has inspired millions around the world, saying "basically nothing has been done" to fight climate change.

"It will require much more than this. This is just the very beginning," the 17-year-old said.

Speaking calmly and with a wry smile, Thunberg acknowledged that her campaign which began with school strikes had attracted huge attention without yet achieving concrete change.

"There is a difference between being heard to actually leading to something," she said.

While the WEF and individual business leaders have been detailing their own concerns about climate change, Greenpeace complained in a new report that some of the world's biggest banks, insurers and pension funds have collectively invested $1.4 trillion in fossil fuel companies since the Paris climate deal in 2016.

Trump in his speech reeled off a list of achievements for the American economy and touted the United States as the "number one producer of oil and natural gas".

There are no expectations that Trump and Thunberg, who have exchanged barbs through Twitter, would actually meet, but the crowded venue and intense schedule mean a chance encounter cannot be ruled out.

When Trump and his entourage walked through UN headquarters last year at the annual General Assembly, a photo of the teenager staring in apparent fury at the president from the sidelines went viral.

Although Trump's Republican party holds a majority in the Senate and is almost sure to acquit him on charges of abusing his power and obstructing Congress, the impeachment adds volatility to an already tense 2020 presidential election.

"We will never let radical socialists destroy our economy," said Trump, apparently referring to his Democratic party opponents ahead of the presidential election in November.

Sustainability is the buzzword at the Davos forum, which began in 1971, with heel crampons handed out to participants to encourage them to walk on the icy streets rather than use cars, and the signage paint made out of seaweed.

Trump's opposition to renewable energy, his withdrawal from the Paris accord negotiated under his predecessor Barack Obama, and the free hand extended to the fossil fuel industry puts him at odds with the thrust of this year's event.

"People are paying a lot more attention" to climate, Eurasia Group president Ian Bremner told AFP at Davos, adding there was "genuine action by some big players", after investment titan BlackRock said it was partially divesting out of coal.

"But let's be clear -- a big part of this is because we failed for a very long time and governments continue to fail," he added.

Business leaders are likely also to be concerned by the state of the global economy whose prospects, according to the International Monetary Fund, have improved but remain brittle.

The IMF cut its global growth estimate for 2020 to 3.3 percent, saying that a recent truce in the trade war between China and the US had brought some stability but that risks remained.

Activists meanwhile will be pressing for much more concrete action to fight inequality, after Oxfam issued a report outlining how the number of billionaires has doubled in the past decade and the world's 22 richest men now have more wealth than all the women in Africa.