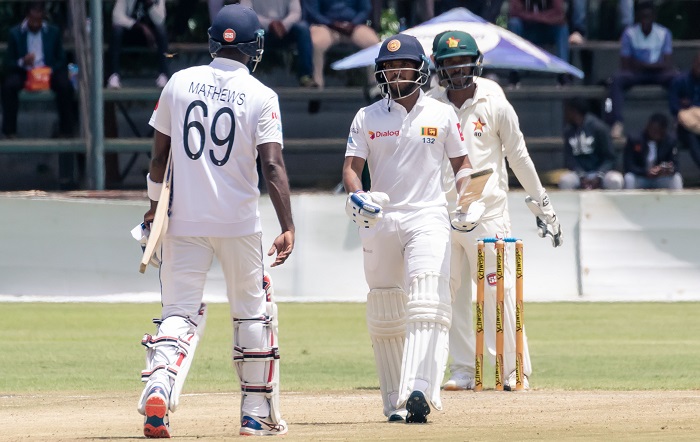 Sri Lanka's Kusal Mendis (C) celebrates after scoring a half-century (50 runs) with his teammate Sri Lanka's Angelo Mathews (L) during the third day of the first Test cricket match between Zimbabwe and Sri Lanka at the Harare Sports Club in Harare on Tuesday. –AFP

After keeping Sri Lanka on the field for 148 overs, it was Zimbabwe's turn to toil on the third morning in the first Test in Harare on Tuesday.

Sri Lanka moved steadily to 124 for 2 - losing the wicket of Dimuth Karunaratne in the session - and trail by 234 now.

After starting the day on 42 for 1, having lost Oshada Fernando in the final session on day two, Kusal Mendis and Karunaratne scored 60 for the second wicket. With the track deteriorating a bit, run-scoring wasn't easy but Karunaratne looked scratchy throughout during his 78-ball stay. The wicket came in the 29th over as Victor Nyauchi picked up his maiden Test wicket. Karunaratne flicked the ball straight to midwicket and fell for 37 about an hour into the session.

There were more nervy moments for the visitors. Angelo Mathews survived a run-out chance in the 37th over when the fielder at midwicket fumbled and failed to get the throw in. Mathews had already given up but made it safely in the end after the misfield.

There were concerns around Kevin Kasuza as well. With less than five minutes to go in the session, Kasuza was hit flush on the helmet while he was at short leg as Mendis tried to pull a short Sean Williams delivery. He walked off the field immediately and looked in considerable pain.