Didn’t expect to be banned over Root dismissal celebration: Rabada 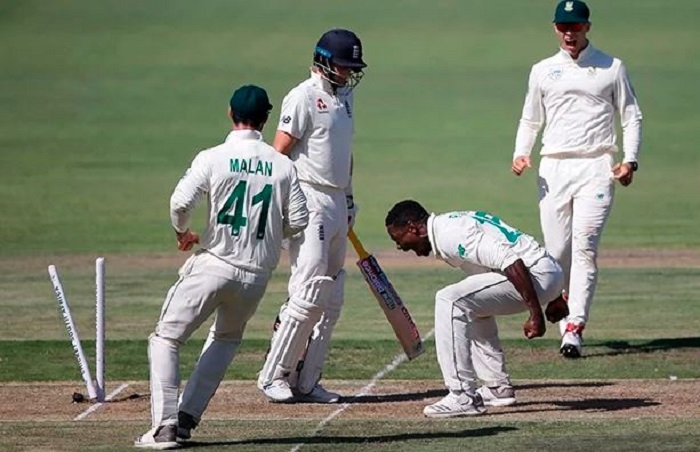 When South Africa won the first Test against England, after their debacle in India, it seemed they were once again on the right path. The fresh backroom staff seemed to be making the right calls and things were progressing again after the recent turmoil. Three Tests down, questions over Faf du Plessis's position are being raised as the hosts find themselves 1-2 down.

Kagiso Rabada, who has been banned from the final Test in Johannesburg, acknowledged he's let the team down but is confident the side will bounce back to level the series. "It's something that I didn't expect," he said.

"Whether it was the right thing to ban me or not, the reality is that I am banned. But I have belief in anyone who is going to come into my spot, I have belief that they will have the potential to knock anyone over. That's why we're all picked for SA. It's a special thing to be picked for the Proteas. I think obviously it hurts, but I guess it gives me a chance to work on my game and a chance to get a bit of a rest. It can't keep happening. I am letting the team down and I am letting myself down. That's why it hurts so much.

"(The mood is) not great. We know we haven't played well. It really does hurt us. Everyone in the change room, I am 100 per cent sure are strong characters and we just need to bounce back. Mentally we need to get in a clear space so that when we get to Wanderers we can really play without any second thoughts, and have a good idea of how we want to go about our situation. We can go there and have an unbelievable Test match, a few things can go our way. It's highly, highly possible and it's quite likely that it can happen as long as we don't lose our determination."

With a short turnaround, South Africa need to find answers to their batting issues that have plagued them since the series in India. In the Port Elizabeth Test as well, they folded for 209 and 237 and suffered an innings defeat. Mark Boucher, the head coach, has come out and taken responsibility for the losses but that would mean nothing if the batsmen can't put runs on the board and learn from mistakes. At this point though, Radaba feels, the side should not overthink their issues.

"It's difficult to find solutions when you're not doing so well in your career. And we as a team haven't been doing so well," he said. "You can get into a situation where you really overthink a situation while trying to find solutions. So it's quite tough to say what to do. But the most imp thing is to stay positive and play positively instead of playing as if you're behind the eight-ball. Because there's many many advises that people can give you. There's always something wrong that you're doing, we're not perfect. So we need to be positive, we need to back our plans and try and play quite aggressively.

"Everyone will have an opinion on you. We've played cricket long enough to know how to get back out of the slump. But it can be difficult, especially when you're playing Tests and a lot is on the line and you so badly need to win and play well for yourself, for the team and for the country - there's so much pressure. So sometimes you can overthink things. I think it's about realising your strengths and what got you into cricket and playing, instead of trying too many things in such a short space of time. We need to trust our ability and play the way you know how to. I also think we are smart enough to read situations."

Rabada also conceded South Africa have been playing catch-up to England throughout the series and that has costed them pretty significantly. "I think every time we have them in some sort of trouble, they get out of that trouble and in that instance, that's where we lose our grip on the game. That's how they get ahead," he pointed out. 'We haven't done ourselves any favours because in the nature of which we played in a pressurised situation where we had the opportunity to get in front of the game. It just feels as if we're always chasing, chasing. And against an experienced Test team, when you're always chasing, you're bound to behind the eight-ball and be under serious pressure.

"I think it's important to win key battles and to hang in there. We haven't batted as well as we'd have liked. I think with the bowling we've done all that we can. And I also feel that we have been a bit unlucky at times. That's what gives them some more momentum as well."