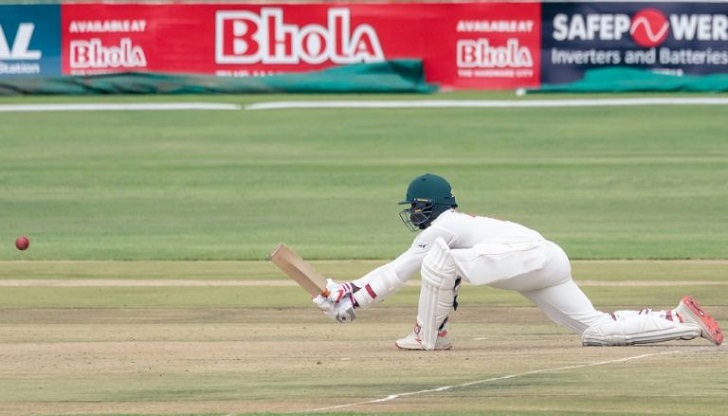 Craig Ervine fell short of a third Test century but his crafted 85, assisted by some gutsy batting from the lower order, took Zimbabwe to 349 for nine at tea on the second day of the first Test against Sri Lanka in Harare on Monday.

Ervine resumed on 55 not out and was going well until Suranga Lakmal returned to the attack shortly before lunch and nipped one through his defence.

It was the third wicket to fall during the morning as Lakmal also produced a full inswinger to have Brendan Taylor leg before for 21 and Sean Williams edged left-arm spinner Lasith Embuldeniya to Niroshan Dickwella behind the stumps.

The left-armer spinner, who ended the session with five for 114, removed Regis Chakabva shortly after the break but Sikandar Raza and Donald Tiripano then both settled in.

Raza fell for a flighty 41, stumped by Dickwella as he charged at Embuldeniya who also bowled Kyle Jarvis.

Ainsley Ndlovu was brilliantly snapped up at short-leg by Kusal Mendis off Lahiru Kumara but Tiripano held firm to reach 41 not out at tea.

The two-Test tour was only announced by the Sri Lankan cricket board last week.

Zimbabwe were readmitted as an ICC member last October following a three-month suspension over political interference.

The Sri Lanka games represent their first Tests since a 1-1 series draw in Bangladesh in November 2018.

Zimbabwe last played a Test at home against the West Indies in October 2017.