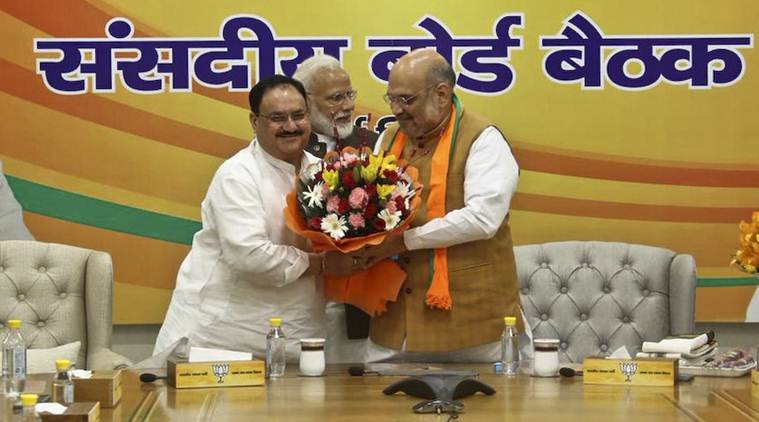 Former Union Minister JP Nadda has been elected unopposed as the new national president of the BJP, with no other leader having filed papers to force an election.

BJP general secretary Bhupendra Yadav on Monday announced the election of 59-year-old Mr. Nadda at the party headquarters in New Delhi, after the requisite nomination and scrutiny process concluded, as well as the time given for withdrawal of nominations. Union Home Minister Amit Shah, who was till this morning the BJP president, felicitated Mr. Nadda on stage upon his election.

Nadda’s election to the post was a foregone conclusion, especially after being appointed the party’s first working president seven months ago, when Shah joined the Union Cabinet.

His nomination was proposed by Shah himself and other members of the parliamentary board, including former BJP presidents and Union Ministers Rajnath Singh and Nitin Gadkari. The election was supervised by former Agriculture Minister Radhamohan Singh.

Nadda, who has been both a member of the Union Cabinet as Health Minister in the first Modi government as well as Minister and Leader of the Opposition in the Himachal Assembly in his career in State politics, will have a challenging year ahead of him, with the Delhi and Bihar Assembly polls looming. The more challenging part of his tenure would be the successful innings of his predecessor, Mr. Shah, considered the most successful BJP president till date, with more than 14 Assembly victories since he took over in July 2014 to a thumping victory in the 2019 Lok Sabha polls.

Considered a soft-spoken and affable consensus builder, Nadda will be expected to exercise a tight rein on the party organisation and revive its prospects in States where the party has lost polls, especially the Hindi belt States like Madhya Pradesh, Rajasthan, Chattisgarh and also big States like Maharashtra.