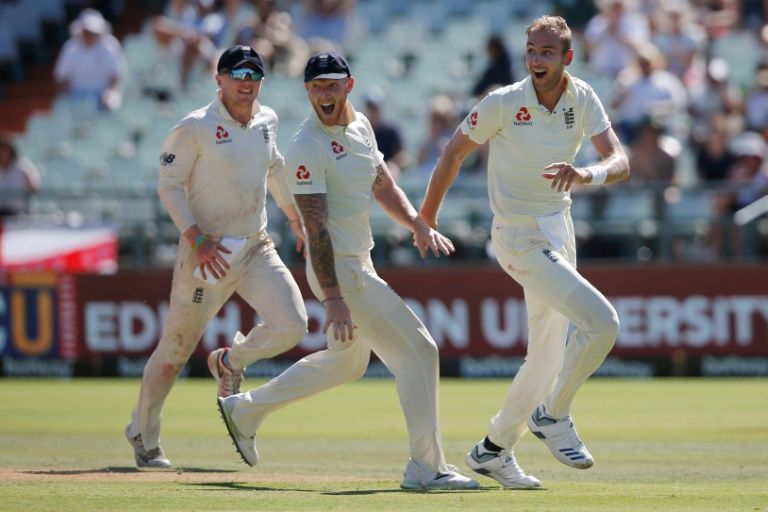 England completed a comprehensive win by an innings and 53 runs on the fifth day of the third Test against South Africa at St George's Park on Monday, taking an unbeatable 2-1 lead in the four-match series.

England were held up by a last wicket stand of 99 between Keshav Maharaj (71) and Dane Paterson (39 not out) and it needed a direct-hit run-out by Sam Curran from mid-on to clinch the result shortly before lunch. South Africa were bowled out for 237.

The partnership between Maharaj and Paterson was easily South Africa's best of the match and showed up an otherwise poor batting performance by the hosts.

South Africa added 135 runs in losing their last four wickets, which seemed unlikely when Vernon Philander chipped a catch to midwicket off Stuart Broad three balls into the day.

Mark Wood and Dom Bess also took wickets but England captain Joe Root could not add to his four wickets taken on Sunday, conceding 56 runs in 10 overs on Monday to finish with four for 87.

Maharaj hit Root for three fours and two sixes in an over which ended with four byes, costing 28 in total.

Despite the late face-saving flourish for the hosts, it was a result which was a triumph for England's youth policy, while the way South Africa were outplayed was a devastating blow for captain Faf du Plessis and new coach Mark Boucher.

Even before Monday's last rites there was speculation about Du Plessis' future. He has expressed his desire to lead South Africa in the T20 World Cup in Australia in October and November, by which time he will be 36.

It seems possible that the fourth Test in Johannesburg from Friday could be his last home series in charge.

It was South Africa's seventh defeat in their last eight Tests, the only exception being their win in the first Test against England when it seemed that radical changes in the team management might have heralded a new dawn.

A resurgent England team bounced back from defeat at Centurion to win the second Test in Cape Town by 189 runs and they dominated in Port Elizabeth, with two 22-year-olds, batsman Ollie Pope and off-spinner Dom Bess playing significant roles.

Pope hit a century of high quality and held six catches in the match, equalling the England Test record.

Bess took the first five wickets in the first innings, his first five-wicket haul in Tests.

The win extended England's unbeaten run in Test series in South Africa, going back to 1999/2000 when Nasser Hussain's team were beaten by a side led by Hansie Cronje. That series ended with England gaining a consolation win in a contrived finish to a Test which it was later revealed had been orchestrated by Cronje in collaboration with a bookmaker.

Since then England have won two series in South Africa and shared one.

The tourists will be favourites going into the final Test at the Wanderers, with South Africa's batsmen lacking form and their bowling resources severely stretched following the suspension of Kagiso Rabada for his over-exuberant celebration after clean-bowling Root on the first day in Port Elizabeth.

The suspension of Rabada seemed to have cast a pall over the South African team, who were lacklustre in the field as Ben Stokes and Pope shared a double century partnership.

Replying to an England total of 499 for nine declared, South Africa batted poorly in both innings with the off-spin of Bess in the first innings and Root in the second innings exposing some poor technique.