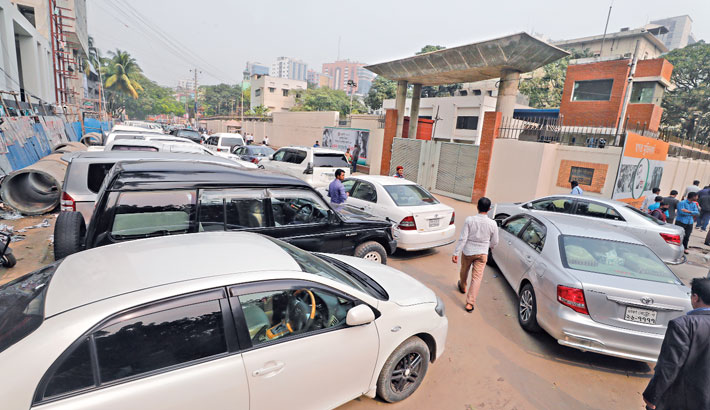 We thank him for aptly showcasing the plight of these beautiful creatures. Unfortunately, hundreds of birds loose their life during the kite festival, hope this image serves as a eye- opener to all.

Weak enforcement of traffic rules to ensure easy movement of traffic in crowded Dhaka has led to indiscriminate parking of vehicles, especially buses and trucks, further worsening the existing chaotic condition on the roads that criss-cross the city.

During a visit to different parts of the city by this correspondent, it was found that not only the old parking areas have blocked the major roads, but also  those cleared earlier have returned to their original state.

Such a chaotic situation is common in the city’s  Tejgaon area. Annisul Huq, North Dhaka’s late mayor, was successful in evicting trucks parked illegally and causing terrible traffic jams have once again has come under the control of truckers.

According to recent reports, illegal parking of vehicles occupies as much as 30 per cent of the city streets and thus is seriously hampering normal traffic flow in addition to causing nuisance for pedestrians.

Experts said lack of monitoring as well as inadequate parking facilities along with slack traffic management were responsible for the growing illegal parking.

When contacted, Bashudev Banik, Joint Commissioner (Traffic), told the daily sun on Saturday that police were working hard to ensure discipline on the roads.

“We regularly go for action against the traffic violators by filing cases and penalizing them,” he said adding that illegally parked vehicles were cleared from time to time, but those always returned after several days.

From Janopad crossing at Sayedabad to Malibagh railway crossing, major parts of this busy road is always kept parked by hundreds of buses of different bus companies and trucks and lorries belonging to Kamalapur Internal Container depot (ICD) causing severe traffic congestion  much to the suffering of the commuters, local people alleged.

About half portion of these busy roads—stretching from Malibagh intersection to Khilgaon flyover, Maniknagar Biswa road to Golapbagh biswa road, Gulistan to Fulbaria, Mirpur Zoo road, Fakirapool, Arambagh and Azimpur road are remained blocked by illegal parking of hundreds of passenger buses of different bus companies.

A good number of trucks and lorries belonging to the Kamalapur ICD remain block the busy Sayedabad to Malibagh road stretching from Gopibagh TT para to Kamalapur foot over via Mughdapara.

A number of buses belonging to intercity “Bahon Paribahan” is also parked blocking both sides of the busy Khilgaon-Malibagh road.

H M Jashimuddin, a roadside furniture trader at Golapbagh Biswa road, said that there were several hundred passenger buses owned by different companies were parked in front of their area-based counters on busy roads.

Police ignore such parking and the bans under different traffic rules also not imposed effectively, he said.

Not only Malibagh-Sayedabad road, many other busy roads in the capital have also been turned into undeclared bus terminals as a number of buses and trucks are kept parked on both sides of the roads, alleged Sirajul Islam, a truck driver of Dhaka North City Corporation.

The indiscriminate parking of these passenger buses are hindering free movement of traffic and causing suffering of the commuters and passerby.

Alamgir Hossain, helper of Bahon Paribahan, parked on roadside of Malibagh-Khilgaon road said, “ We usually park our vehicles on this roadside as the company has no any parking terminal”.

Like Malibagh-Khilgaon road, illegal parking of many vehicles on different busy roadsides in the capital is a regular phenomenon, the bus helper added.

Alongside passenger buses, many other motor vehicles including private cars are also parked on busy roads, in front of different government offices, school and colleges, shopping malls and hospitals in the capital indiscriminately blocking major portion of the busy footpaths and roads causing huge traffic congestion and suffering of the commuters and passerby.

Both the criminals and sections of the police are minting money through extortion from many illegally parked vehicles, mostly passenger buses.

Illegal parking, in whichever form, poses a threat to the safety of other motorists and pedestrians.