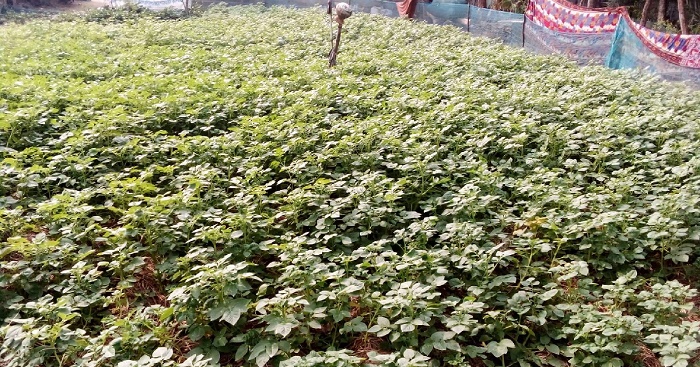 The residents of Khulna’s coastal Koyra upazila are increasingly becoming interested in lawn farming to feed their families and make some money.

Crops like tomato, brinjal, bean and potato are cultivated but the tuber is the most popular item since it takes less efforts.

The Department of Agricultural Extension (DAE) said villagers in the upazila cultivated potato on 90 hectares of land at approximately 6,000 house yards this year. Upazila Agriculture Officer Mizan Mahmud said they regularly meet and encourage lawn farming and sometimes arrange training for the villagers.

“With our support, more villagers have become interested in cultivating potato in their front yards this season,” he said.

Koyra was hit hard by cyclones Sidr and Aila that damaged not only the crops but also increased the salinity in soil. Over the years, the salinity has decreased, prompting people to cultivate crops in their lawns, the DAE said.

Locals said farmers had poor harvest in the last five years as most of the villages and fields were inundated many times by salty water.

Md Monirul Islam of South Bedkati union said the area suffers from soil salinity since it is close to the Sundarbans. “The region normally gets inundated during cyclones and its crops are damaged,” he said.

But during this winter, many villagers cultivated crops in their yards. “I’m growing potatoes on three decimals of land at my yard,” he said.

Achintya Sarkar of Mazer Athi area said he is growing potato on 15 decimals in his lawn to meet the family’s demand. “I hope to produce 22-25 maunds of potato this season. I’m planning to sell the rest after meeting my family’s demand for some extra cash,” he added.

Many women are also directly involved in lawn and backyard farming. Mita Rani Mondol of Bizlighata Bazar is one of them.

She said she takes care of the potato after finishing household chores. “Cultivating crops in the yards is empowering women since it helps feed their families and provides a source of earning,” she said.