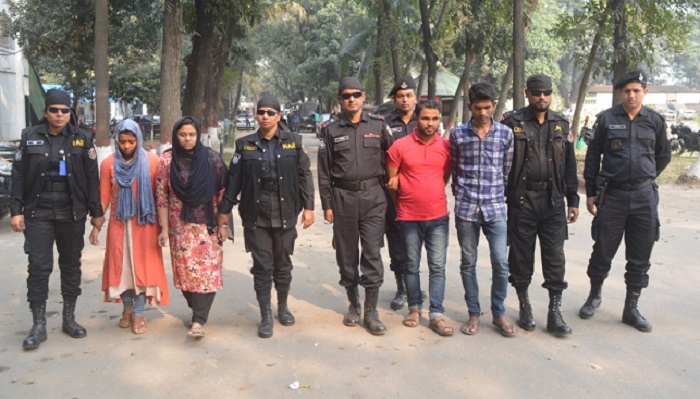 Sources at the RAB-1 battalion headquarters said Juli went to Ashraf Ali’s house in Sharifpur under the guise of renting a room on January 16 (Wednesday). On Saturday morning, Juli returned with her younger sister Tuli around 8 am and said they would like to seal the deal by paying some advance.

Engaging the family in conversation,  Juli and Tuli at one stage somehow convinced unsuspecting Ashraf and other members of his family into having some juice mixed with sleeping pills which they had brought with them, according to RAB.

After the whole family fell unconscious, they abducted Araf and looted cash money, gold ornaments and several mobile sets before fleeing the scene.

At one stage, neighbours took them to the nearby hospital. After primary treatment, Ashraf Ali and his family members regained their senses in the afternoon and found Araf missing.

Finally, the kidnappers contacted Araf’s mother over the phone at around 5:30 pm and demanded Tk 20 lakh as ransom, otherwise, they (kidnappers) threatened to kill the child.

As Araf’s family members sought legal help from the RAB-1, the elite force started investigation instantly. At one stage, an operational team of the battalion arrested Juli and Tuli from the Signboard area of the Gazipur city while they were transacting money over bKash at around 9:30 pm, said Commanding Officer of RAB-1 Lt Col Shafiullah Bulbul.

Based on their information, the elite force rescued the abducted child Araf with serious illness from an abandoned room of a flat in the Signboard area and arrested Aminul and Sumon,  Lt Col Shafiullah Bulbul also said, adding that one gold earring and four mobile phone sets were recovered from their possession.

During preliminary interrogation, they revealed that they are members of an organized kidnapping gang. They had been involved in various criminal activities, including kidnapping, stealing and hijacking in Gazipur area for a long time.

A case was filed with Gacha police station.