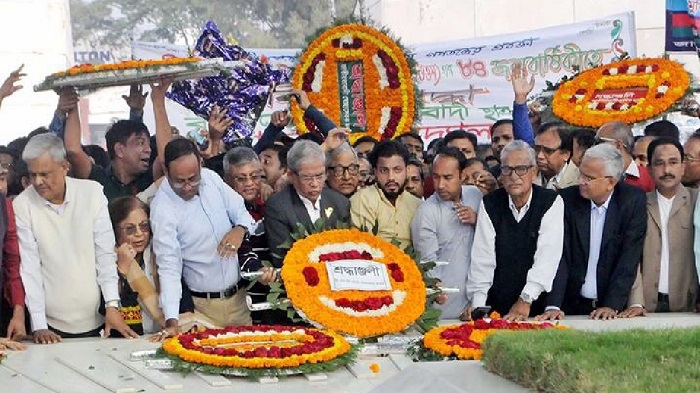 BNP leaders and activists, led by party Secretary General Mirza Fakhrul Islam Alamgir, paid homage to Zia by placing wreaths at Zia’s grave in the morning on the occasion.

They also offered fateha at the grave of their founder and joined a munajat seeking eternal peace of his departed soul.

Talking to reporters there, Fakhrul said, “We’ve taken a vow after paying tributes to Ziaur Rahman that we’ll restore democracy and free Khaleda Zia at the cost of any sacrifice.”

He said they will also work for the implementation of the 19-point of Ziaur Rahman being imbued with his ideals.

BNP’s flag was hoisted atop all the BNP offices across the country.

BNP arranged a discussion at the Institution of Engineers, Bangladesh in the afternoon, marking the day.

Born on January 19, 1936 at Bagbari in Bogura, Ziaur Rahman founded BNP in 1978 and became the country’s seventh President.