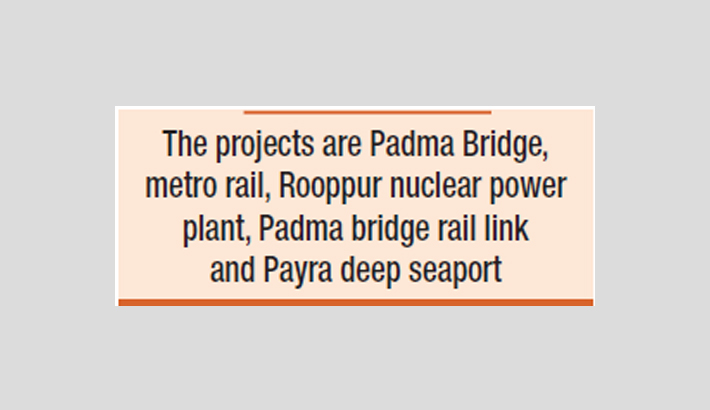 The government is going to review the progress of the fast-track mega projects aiming to speed up their implementation.

A meeting of the monitoring taskforce for the fast-track projects was held with Juena Aziz, chief SDGs coordinator at Prime Minister’s Office (PMO) last week.

Another meeting of the top body—fast-track project monitoring committee—is slated for today (Sunday) to be held at PMO with Prime Minister Sheikh Hasina in the chair, official sources said.

Other projects are Matarbari and Rampal coal-fired power plants, Dohazari-Gundum-Cox’s Bazar rail track, among others.

“Last week’s meeting was a preparatory one ahead of PM’s meeting which will be decisive for the fast-track project evaluation as she is the highest authority,” commented an official of Economic Relations Division (ERD).

ERD has been tasked with looking after the progress of these priority projects and compile and prepare their latest advancement.

“The mega projects have gained momentum recently in comparison with their earlier pace because of heightened project oversight. We hope that these projects will be implemented soon,” the ERD official added.

Main bridge construction work, however, advanced faster at 85.50 per cent while river training work is lagging behind as it advanced 66 per cent so far.

The total project is supposed to be completed by June next year with river training work, designed to protect the structure from river erosion, finishing by December this year.

The country’s costliest Rooppur nuclear power plant project, on the other hand, so far advanced 18.5 per cent, according to ERD’s fast-track project report.

The mammoth project is being implemented at an estimated cost of Tk 1,13,0.93 billion, of which Tk 209.25 billion has so far been spent.

The project is being implemented at Tk 160 billion by joint financing of Bangladesh and India. It has a completion deadline from July 2009 to June 2020.

Meanwhile, Payra deep seaport project saw 56.64 per cent progress. The government is implementing a primary phase of the project at a cost of Tk 33.50 billion. It will be finished through 19 components.

Matarbari coal power plant project in Cox’s Bazar advanced 26.72 per cent. So far, Tk 95.28 billion out of Tk 359.84 billion project cost has been spent in this mega scheme. There is a plan to set up a deep seaport under the scheme.

Its cost is even higher than the Padma bridge project at Tk 392.47 billion, a larger portion of which is being provided by China Exim Bank. So far, Tk 117.59 billion has been spent against it.

The government is spending Tk 180.34 billion on constructing a duel gauge single track from Dohazair-Ramu-Cox’s Bazar and then from Ramu to Gundum near Myanmar border for promoting tourism and help build trans Asian railway.

The project so far so 29 per cent overall progress as Tk 40.12 billion has been spent against the fast-track scheme.