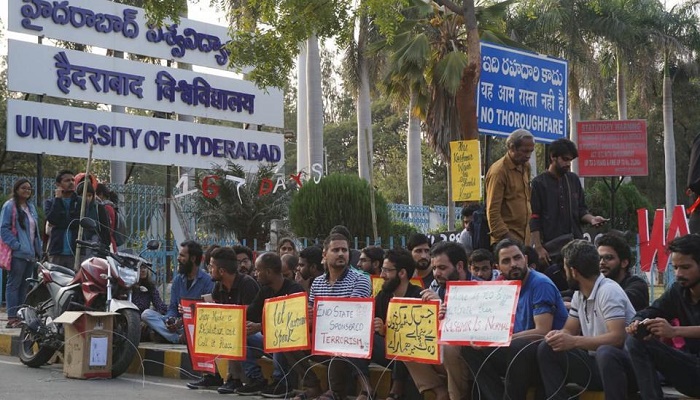 Kashmiri students of the University of Hyderabad staged a protest on Saturday against the continued clampdown in Kashmir valley and “state repression” against Kashmiris even as the Centre launched its outreach programme with the first group of Union ministers visiting Jammu to highlight awareness about central schemes implemented after the removal of Article 370 in Jammu and Kashmir.

The protest which went on for about two hours in the late afternoon, was organised by Jammu and Kashmir Students’ Association (JKSA) in the name of “Sada-e-Mazloom” (Voice of the oppressed) outside the university campus.

“It was meant for reflecting the plight of grieving widows and star-crossed orphans, of nameless graves and dark caves,” JKSA president Hadif Nissar said.

He said the students who took part in the dharna expressed their protest against “injustice being done to millions of Kashmiris, continued siege of the state, curbing the freedom of expression in the form of internet ban for more than five months and illegal detentions.”