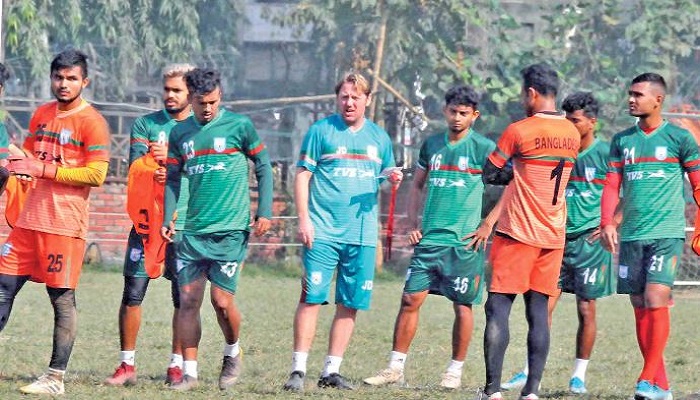 Players of Bangladesh National Football Team are seen at a training session on Saturday at Sheikh Jamal Dhanmondi Club playground ahead of their Bangabandhu Gold Cup match against Sri Lanka today at Bangabandhu National Stadium in the capital. — BFF Photo

Hosts Bangladesh will play the Islanders Sri Lanka in the second and last Group A match of the ongoing six-team Bangabandhu International Gold Cup Football Tournament’2020 on Sunday eyeing on the semi-final berth.

The match will kick-off at 5:00pm at the Bangabandhu National Stadium in the capital.

Palestine have already reached in the semifinals as the Group A champions with all-win run. The West Asian team made the equation tough for Bangladesh and Sri Lanka beating both of them by the same 2-0 goals margin. So, Bangladesh have to beat Sri Lanka to confirm their spot for the semi-final.

Sri Lanka displayed an amazing football in their first group match as they kept Palestine at bay for 90 minutes. All the credit go to their defenders and goalkeeper Herath who successfully saved the post till captain Mohamoud Abuwarda and forward Khaled Salem scored one goal each in the stoppage time.

On the other hand, Bangladesh wasted so many chances of scoring against Palestine in their first match. Despite having better ball possession and attacking percentages, the hosts failed to convert goals in the match.  Forwards Khaled Salem and Layth Kharoub netted one goal each for the winning side.

Bangladesh might face another trouble in the must-win match if their captain Jamal Bhuiyan miss the game due to injury. Jamal got a series hamstring injury during their first match against Palestine and isn’t 100 percent fit for Sunday’s match.  Booters held a practice session at Lt Sheikh Jamal Dhanmondi Club ground on Saturday morning without their captain Jamal.

“We have rested Jamal on Saturday. He isn’t 100 percent fit, still recovering; but we are optimistic about him, let’s see,” said Team Manager Satyajit Das Rupu.

While asking about Jamal’s possibility, Head Coach Jamie Day replied, “We are not sure about him [Jamal]. It depends on him.”

About the match, Jamie said, “Preparations are good. Obviously we are eyeing win against Sri Lanka.”

About his present situation, Captain Jamal Bhuiyan said, “The probability of my playing is now 75 percent. Still there is pain and facing difficulties of lag movement.”

“I will try running again on Sunday morning. If don not feel pain, I will play,” Jamal added.

Bangladesh are 187th in the FIFA Rankings while Sri Lanka are 205th. In their last match, Bangladesh beat Sri Lanka by 1-0 goal in the 13th South Asian Games Football at the Dasharath Rangasala Stadium in Kathmandu.