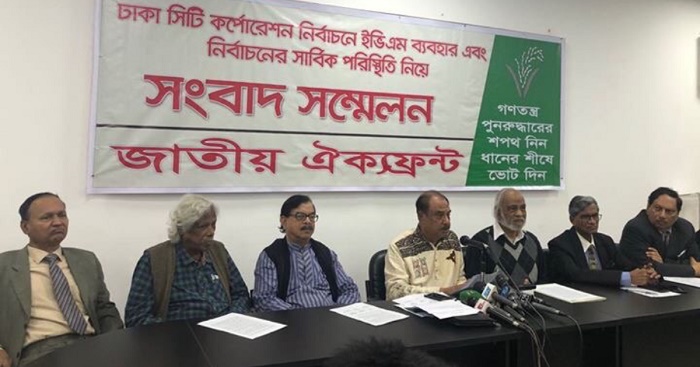 Describing the electronic voting machine (EVM) as a new method of rigging votes, Jatiya Oikya Front on Saturday warned that it will not allow the Election Commission (EC) to use it in the elections to two Dhaka city corporations.

At a press conference at Dhaka Reporters Unity (DRU), the alliance urged the EC to back off from its decision of using the EVM in the city polls.

“We would like to clearly say the entire world has rejected the EVM and it should be dumped in the Bay of Bengal, not in the Buriganga as the country’s people don’t want it. EVM use can’t be allowed,” said Oikya Front leader ASM Abdur Rob.

He further said, “EVM is the new method of rigging votes, and we’re protesting against it.  This machine can’t be used.”

Rob, also the president of Jatiya Samajtantrik Dal (JDS-Rob), called upon the EC to use traditional ballot papers in the city polls as the voters and most of the stakeholders do not support voting with EVM.

Asked whether their alliance may boycott the polls if the EC does not retreat from its decision of using the voting machine, he said they will continue their movement through the election. “Still, we don’t have any decision to boycott the election as our last resort to register our protest.”

The JSD president said as people do not have confidence both in the administration and the Election Commission, the government is trying to resort to evil designs to cling to power without holding free and fair elections.

He said their alliance thinks EVM is a weapon to snatch people’s voting rights since the machine will be operated by people like any other technology.