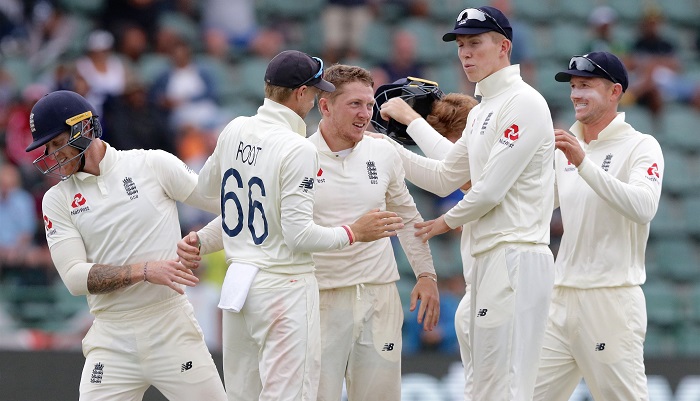 England's Dominic Bess (C) celebrates with teammates after the dismissal of South Africa's Rassie van der Dussen during the third day of the third Test cricket match between South Africa and England at the St George's Park Cricket Ground in Port Elizabeth on Saturday. -AFP

Off-spinner Dom Bess claimed his first Test five-wicket haul before rain interrupted England's push for victory on the third day of the third Test against South Africa on Saturday.

Multiple spells of rain stopped play for over three hours at the St George's Park, and no play was possible after Lunch - which was taken 15 minutes before the scheduled time.

Bess took all the wickets as South Africa slumped to 113 for five in reply to England's 499 for nine declared, still 386 runs in arrears.

With England seeking a win which would put them 2-1 ahead in the four-match series, rain started falling 15 minutes before the scheduled lunch break and continued through most of the afternoon, preventing any play between lunch and tea.

Bess bowled unchanged from the northern, Duck Pond end, and finished the morning with five for 41 in 18.2 overs. He had taken a total of five wickets in his previous three Tests at a cost of 48 runs each.

He was the first England spin bowler to take the first five wickets in an innings since Derek Underwood claimed the first seven against Australia in Adelaide in 1974/75.

Bess, who was not originally in England's tour party, was flown out as cover for the ill Jack Leach, who has subsequently returned home. He bowled steadily on a pitch offering significant but not extravagant spin.

Bess struck in the fourth over of the day when Dean Elgar was caught for 35 off bat and pad at silly point by Ollie Pope, the second of three catches by Pope.

South African captain Faf du Plessis used his feet to off-drive fours off the third and fourth balls he faced from Bess, who switched from round the wicket to over the wicket and two balls later had Du Plessis caught by Pope at short leg, again off bat and pad.

Rassie van der Dussen made 24 before chopping an attempted cut off Bess into his stumps, one over after hitting 11 runs off the spinner.