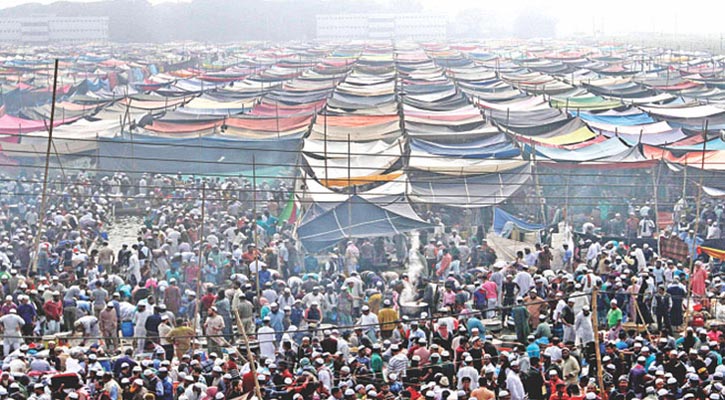 The 55th Bishwa Ijtema will end with the second phase’s Akheri Munajat (final prayer) in the early morning tomorrow on the banks of the river Turag at Tongi, on the outskirts of the capital.

Thousands of Muslim devotees from home and abroad have already gathered on the Ijtema ground to join the Akheri Munajat of the three-day second phase of the Bishwa Ijtema that began on Friday amid intensified security measures.

On the second day of the first phase’s Ijtema, the second largest congregation of the Muslim community after Hajj, Islamic Scholars delivered sermons on different aspects of Islam in the light of the holy Quran and Hadith today.

The Muslim devotees have thronged the Ijtema ground under the open sky while more than 1,500 foreign devotees from 35 countries, including from Jordan, Libya, Africa, Lebanon, Afghanistan, Palestine, the USA, Turkey, Iraq, Saudi Arabia, India, Pakistan, England, joined the Ijtema from the first day of the second phase.

On the occasion of the Akheri Munajat, vehicular movements will remain suspended from the Saturday midnight to Sunday afternoon on the Airport to Joydebpur intersection of the Dhaka-Mymensingh Highway, Mirer Bazar to Tongi bus stop of the Dhaka-Sylhet Highway via Gazipur and Kamarpara to Ashulia road.

Besides, about 8,500 members of different law enforcement agencies have been deployed for ensuring security in and around the Ijtema ground.

The total death tolls of the devotees in the 55th Bishwa Ijtema stood at 18 so far, including 13 in the first phase.

Earlier, the first phase of the Ijtema was held January 10 to 12 at the same venue.

Tablig Jamaat has been organizing the Biswa Ijtema on the bank of Turag river since 1967. Now, Ijtema is being held in two phases since 2011 to ease the accommodation problem.