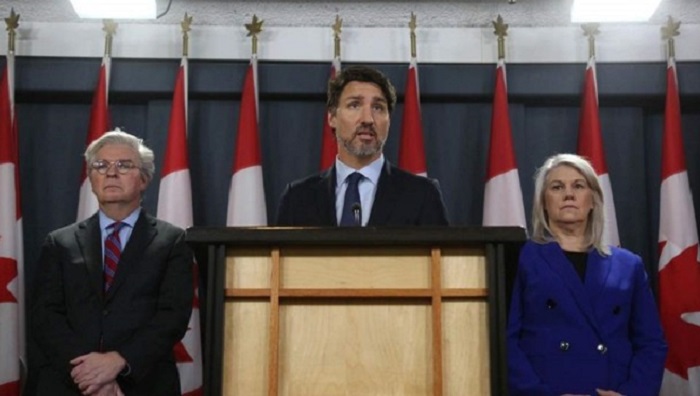 Canadian Prime Minister Justin Trudeau on Friday urged Iran to hand over black boxes from last week's downed airliner to France, saying it has one of the few laboratories capable of properly examining them.

"Iran does not have the level of technical expertise and mostly the equipment necessary to be able to analyze these damaged black boxes quickly," Trudeau said.

So, he told a press conference, "the right place to send those black boxes to get the proper information from them and in a rapid way" is France, adding "that is what we're encouraging the Iranian authorities to agree to."

"There are only a few places, like France, that have laboratories that can do it," the prime minister explained.

France has offered its services and there is a "beginning of a consensus" to send the significantly damaged flight data and cockpit recorders from the downed Ukrainian airliner there, he said.

Earlier, Ukraine's foreign minister, Vadym Prystaiko, said Iran was ready to hand over the black boxes to his country.

Prystaiko said Tehran would grant a team of investigators from Iran and Canada -- as the countries that lost the most nationals -- access to the recorders.

"After that, the Iranian side is ready to separately transfer the black boxes to Ukraine," he said.

Ottawa has said 57 of the passengers were Canadian citizens.

Trudeau said Friday another 29 were permanent residents and that Canada was the final destination for 138 of the 176 passengers and crew on the Kiev-bound plane, including visitors and students.

After initial denials, Iran admitted it shot down the plane "unintentionally" while on high alert after firing missiles at US troops stationed in Iraq in retaliation for the killing of top Iranian commander Qasem Soleimani in a US drone strike.

In Ottawa, Trudeau also pledged interim funds for families of the Canadian victims of the crash, but said he ultimately expects Iran to pony up full compensation.

He said his government would provide Can$25,000 (US$19,000) to each family of the Canadian victims -- both citizens and permanent residents -- to assist with funeral arrangements, travel to Iran and other costs.

"I want to be clear: we expect Iran to compensate these families," Trudeau said.

But, he added, "I have met them and they can't wait weeks. They need support now."

No Canadian remains so far recovered from the crash have been repatriated. Trudeau said he expects the first to arrive in Canada "in the coming days."

According to a readout, Champagne pressed his counterpart to heed calls for a "thorough and transparent investigation" of the crash, and "full access" for Canadian officials to provide consular services and assist in victim identification.

Canada severed diplomatic ties and shuttered its embassy in Tehran in 2012.