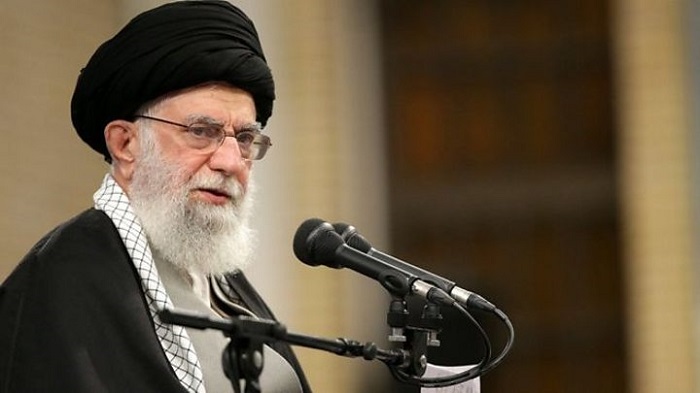 Iran's Supreme Leader Ayatollah Ali Khamenei has defended the country's armed forces after it admitted shooting down a passenger plane by mistake.

He said the Revolutionary Guard - the elite unit responsible for the disaster - "maintained the security" of Iran.

Widespread protests and criticism from abroad have put growing pressure on Iran over its handling of the incident.

But the ayatollah tried to rally support as he led Friday prayers in Tehran for the first time since 2012.

The Ukraine International Airlines Boeing 737-800 was travelling to Kyiv from Tehran on 8 January when it crashed shortly after take-off. All 176 passengers on board, including nationals from Iran, Canada, Sweden and the UK, were killed.

The ayatollah called for "national unity" and said Iran's "enemies" - a reference to Washington and its allies - had used the shooting down of the plane to overshadow the killing of senior Iranian general Qasem Soleimani in a US drone strike.

"Our enemies were as happy about the plane crash as we were sad," he said.

"[They were] happy that they had found something to question the Guard and the armed forces."

The Iranian authorities initially denied responsibility but, after international pressure mounted, the Revolutionary Guard admitted that the plane had been mistaken for a "cruise missile" during heightened tensions with the US.

Hours before it was shot down, and in response to the killing of Soleimani, Iranian missiles targeted two airbases in Iraq that housed US forces.

Washington initially said no US troops had been injured, but it later reported that 11 people had been treated for concussion after they showed symptoms days after the missile strikes.

What else did the ayatollah say?

Ayatollah Khamenei, 80, addressed the nation from the Mosalla mosque in the capital. The last time he did so was in 2012 on the 33rd anniversary of the country's Islamic Revolution.

Leading Friday prayers in the capital is a symbolically significant act usually reserved for times when Iran's highest authority wishes to deliver an important message, says Mehdi Khalaji of the Washington Institute for Near East Policy.

Historically, Iranian leaders have left this task to loyal clerics with strong oratorical skills, he adds.

As well as defending the military, the ayatollah:

Defending his rule and his government

This sermon was an effort from Iran's supreme leader - who has come under heavy criticism in recent days - to defend his rule.

He delivered part of his address in Arabic, calling on the Arab and Islamic world to drive the US out of the region. "The biggest punishment for the United States is its expulsion," he said.

But his more immediate aim was to shore up his government after the Ukrainian passenger plane was shot down. The episode has weakened Ayatollah Khamenei's position at home. There have been protests up and down the country, with demonstrators shouting slogans and calling on him to step down.

Today, the ayatollah accused the protesters of being influenced by foreign-based media. He also praised the Revolutionary Guard for bringing security to the country.

But, ultimately, he seemed to have little new to say. As a result, he is unlikely to have won much support for the policies he has been pursuing.

Many in Iran had hoped the ayatollah would change course and admit past mistakes. That was far from the case.

What about the plane investigation?

After a meeting in London on Thursday, ministers from five nations that lost citizens in the crash demanded "full co-operation" from Iran in a transparent international inquiry.

Speaking on behalf of the group, Canadian Foreign Minister François-Philippe Champagne said: "We are here to pursue closure, accountability, transparency and justice for the victims... through a full, complete and transparent international investigation.

"In the wake of such a horrific tragedy there are many many questions. Families want answers, all of the countries assembled here today want answers, and the international community want answers. The world is waiting for those answers and we will not rest until we get them."

Champagne said all those responsible must be brought to justice.