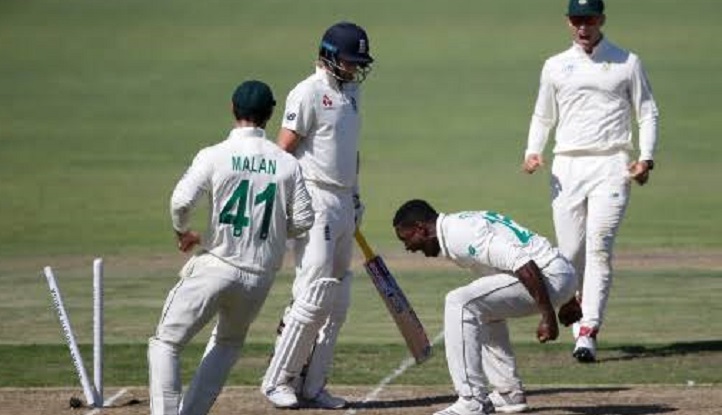 Kagiso Rabada was criticised by former West Indies fast bowling great Michael Holding and ex-England batsman Kevin Pietersen on Friday after incurring a ban which will put him out of the fourth and final Test against England in Johannesburg next week.

Both former internationals said Rabada had let his team down by being a repeat disciplinary offender.

The South Africa fast bowler pleaded guilty to a level one breach of the International Cricket Council's code of conduct because of the way he celebrated the dismissal of England captain Joe Root during the first day of the third Test at St George's Park on Thursday.

He was fined 15 percent of his match fee and handed one demerit point. As it was his fourth demerit point in a 24-month period he incurred an automatic one-match ban.

"He has to learn," said Holding, who was commentating for SuperSport television.

"You can't keep making the same mistakes. He has to remember he is damaging his team. South Africa without Rabada at the Wanderers - that's a big blow."

After bowling Root, Rabada charged down the pitch before celebrating with fists clenched almost with touching distance of the England captain.

Rabada pleaded guilty to "using language, actions or gestures which disparage or could provoke an aggressive reaction from a batter upon his or her dismissal".

Fellow commentator Pietersen said the way Rabada got close to batsmen after dismissing them was unacceptable.

"He shouldn't be celebrating in a batsman's personal space," he said, adding Rabada had behaved in a similar way after dismissing Zak Crawley during the second Test in Cape Town.

One of Rabada's previous offences occurred at St George's Park two years ago when he made shoulder contact with then-Australian captain Steve Smith.

He was initially banned for two matches after being docked three demerit points but this was reduced to one on appeal, enabling him to complete the series but putting him on the threshold of a ban.