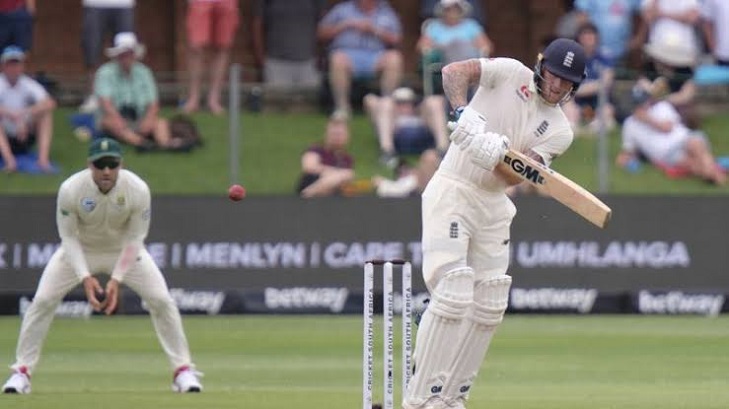 England's Ben Stokes hit his ninth Test century as he and Ollie Pope punished a dispirited South African bowling attack on the second day of the third Test at St George's Park on Friday.

In contrast to an attritional first day, when England could only score 224 for four in 90 overs, Stokes and Pope added 111 runs in 27 overs after the start of play was delayed by 45 minutes by rain.

Hit by the news that strike bowler Kagiso Rabada would miss the fourth and final Test after incurring a fourth disciplinary demerit point within 24 months, South Africa's bowlers neither posed a significant threat nor were able to exert the control they did on the first day.

The hosts had one brief and illusory moment of success when Pope was given out leg before wicket to debutant Dane Paterson shortly before lunch when he had 74 - only for the decision to be overturned on review because the ball was missing leg stump.

Left-arm spinner Keshav Maharaj, who conceded only 55 runs in 32 overs on Thursday, was plundered by Stokes, who hit sixes in both of the spin bowler's first two overs, one of which sailed out of the ground beyond midwicket. Maharaj gave up 40 runs in nine overs on Friday.

Stokes hit 10 fours and two sixes in his century -- his third against South Africa. Pope played some strokes of high quality in equalling the highest score of his brief Test career -- 75 against New Zealand in Hamilton last month.

Together the pair had added 187 in a partnership that could be crucial in a series which is tied at 1-1.