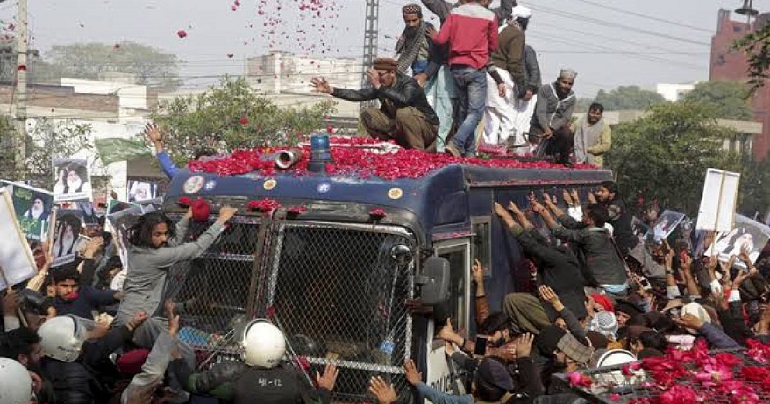 Supporters of Tehreek-e-Labbaik, a Pakistani religious group, surround an armored police armored car carrying their leader, Khadim Hussain Rizvi, as he arrives to a court in Lahore, Pakistan. File Photo:AP

A Pakistani court has sentenced 86 members of a radical Islamist party to 55-year prison terms each for taking part in violent rallies in 2018 over the acquittal of a Christian woman in a blasphemy case, a party official said Friday.

The verdicts, unusually harsh for Pakistan, were announced late Thursday night by the court in Rawalpindi, a garrison city near Islamabad. The trial had lasted for over a year. Pir Ejaz Ashrafi, a senior leader of the radical Tehreek-e-Labbaik party, said the sentences would be appealed.

Among those sentenced was Ameer Hussain Rizvi, the brother of firebrand cleric Khadim Hussain Rizvi who heads the party.

" Justice has not been done," Ashrafi told The Associated Press. "We will challenge the verdicts."

The 86 were charged with damaging public property, beating people up and disrupting normal life by staging sit-ins against the acquittal of Aasia Bibi earlier that year.

Bibi was convicted of blasphemy in 2009 and sentenced to death on charges of insulting Islam. Her case stemmed from a quarrel with fellow farm workers who refused to drink from the same water container used by a Christian. She consistently denied the charges against her.

The country's Supreme Court overturned her conviction in 2018 but after hard-line Islamists staged nationwide rallies against the ruling, authorities continued to hold her in protective custody before she was allowed to leave for Canada last year to reunite with her family there.

Pakistan's blasphemy laws are often used to settle scores or intimidate followers of minority religions, including Shiite Muslims. A charge of insulting Islam can bring the death penalty, and the mere accusation of blasphemy is sometimes enough to whip up vengeful mobs, even if courts acquit defendants.

In two related cases, Salman Taseer, the governor of eastern Punjab province, was shot and killed by one of his bodyguards in 2011 for defending Bibi. His assassin, Mumtaz Qadri, was celebrated as a martyr by hard-liners following his execution, with millions visiting a shrine erected in his honor near Islamabad. Later in 2011, Pakistan's minister for minorities, Shahbaz Bhatti, was assassinated, also after demanding justice for Bibi.

Last month, in the Pakistani city of Multan, a court convicted Junaid Hafeez, a Muslim professor, of blasphemy, sentencing him to death for allegedly spreading anti-Islamic ideas. He was held for six years awaiting trial and spent most of that time in solitary confinement.

A prominent Pakistani lawyer, A.K. Dogar, criticized Thursday's verdicts, saying they were mostly symbolic and that none of those convicted would spend more than 25 years in prison at the most, which is equivalent to a life sentence under Pakistani law. Dogar was not involved in the case of the sentenced Tehreek-e-Labbaik members.

"Imprisonments given by judges of more than 25 years are mostly symbolic," he said. "The convicted person only spends a maximum 25 years in prison."