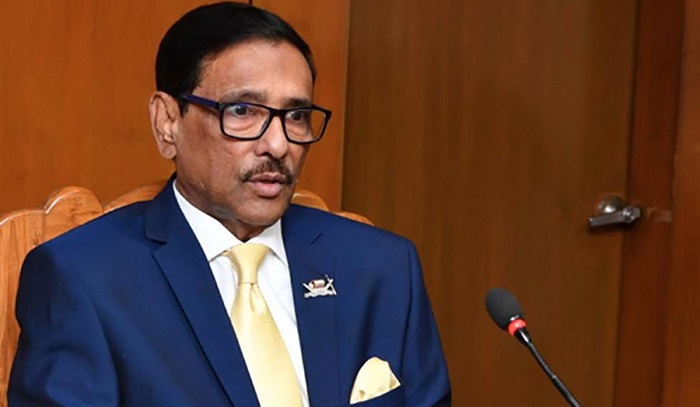 Awami League (AL) general secretary Obaidul Quader on Friday said their party or the government has no objection if the Dhaka city corporation polls date is deferred due to the celebration of the Saraswati Puja.

“Awami League or the government has no objection if the date of the Dhaka city corporation polls is changed due to the Saraswati Puja. However, the Election Commission (EC) possesses the full authority to defer the city elections date,” he said.

Quader, also the road transport and bridges minister, came up with the remark while talking to reporters after attending an AL secretary-level meeting at party president Sheikh Hasina's political office in the capital’s Dhanmondi area.

The AL leader also hoped that the EC would reach a fair solution through discussions showing due respect to religious belief of the Hindus.

“He (Fakhrul) himself was elected in a seat (in the general election) where the EVMs were used. A BNP candidate also won a municipality election in Bogura where voting was held using EVMs,” he said.

Replying to a question, the AL general secretary said BNP leaders are simultaneously making derogatory remarks on Prime Minister and AL President Sheikh Hasina and other AL leaders but AL did not file any case against them. “They will not find such freedom in any part of the world,” he added.

Coming down heavily on Gono Forum chief Dr Kamal Hossain for his remarks on the city polls, Quader said the EC has announced the election schedule. The government did not do any wrong in this regard and that is why the remarks of Kamal were not fair at all, he added.

Quader urged the AL leaders who are contesting in the city elections as councilor candidates without the party’s consent to withdraw their candidature.

Replying to another query, the AL general secretary said the party central committee and advisory council members will pay homage to the mazar (Shrine) of Father of the Nation Bangabandhu Sheikh Mujibur Rahman in Tungipara on January 24 and will offer milad and doa there.

(With input from BSS)