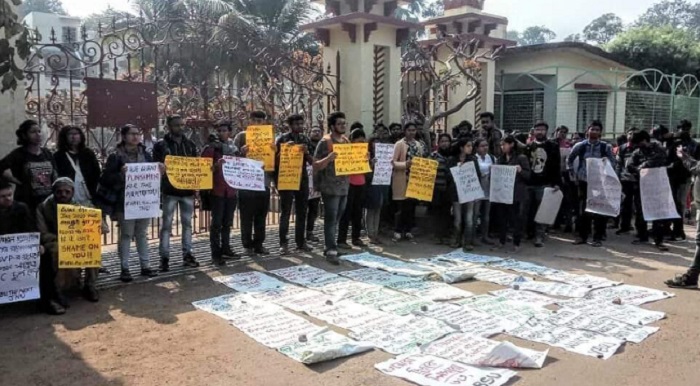 Two students of the university also activists of the Students Federation of India (SFI) were reportedly injured in ABVP men’s attack carried out on Wednesday night.

The students were identified as Swapnaneel Mukhopadhyay and Phalguni Pan, of the Economics department, have reportedly been admitted to Pearson Memorial Hospital.

According to them, ABVP members Achintya Bagdi and Sabbir Ali beat them up with sticks when they were returning to their hostel and also tried to attack them inside the hospital. They also alleged that the guards had to lock the hospital gates to prevent another assault.

“I was returning home from university when they beat us up with sticks. They were Achintya Bagdi and Sabbir Ali. This was done as we had staged a protest against BJP MP Swapan Dasgupta on January 8,” Swapnaneel told reporters from the hospital bed.

Phalguni Pan, who was also injured, said the alleged attackers were previously with the Trinamool Chhatra Parishad (TMCP) — students’ wing of TMC — and had recently joined the ABVP. “They used to be with the TMCP and now this Achintya Bagdi is a member of AVBP unit at Visva Bharati University. He along with Sabbir Ali carried out the attack. Their main objection was why we took part and supported the nation-wide bandh against the implementation of CAA, NRC, and NPR. They also opposed our decision to stage a protest against CAA at the campus,” said the student.

On January 8, SFI members confined BJP MP Dasgupta, Visva-Bharati Vice-Chancellor Bidyut Chakraborty and several others to a room for over seven hours to protest against the university’s decision to invite Dasgupta to deliver a lecture on the new citizenship law.

Bagdi denied the allegations and said he was not an ABVP member. “Yesterday we got reports from a student that there was trouble inside the VBU campus. We only went there to stand by our students. Later we got to know that SFI members entered into a fight with their own members which left some of them injured. It is a conspiracy which has been hatched against us by the SFI and the ABVP,” said Bagdi.

SFI state secretary Srijan Bhattacharya pinned the blame on the ABVP and said the RSS students’ wing is trying to wash its hands off the matter. “Their identity has come out in the open. These students were seen holding a meeting with VBU VC and attending ABVP meetings. These former TMCP members have found shelter in the ABVP now. They attacked our members in a pre-planned manner. We will protest against this,” said Bhattacharya.

The ABVP, however, denied their involvement in the incident. “No ABVP member was involved in yesterday’s incident. Left members are trying to disrupt the academic environment of the university in various ways. Even Rajya Sabha MP Swapan Dasgupta faced protests from Left activists and was gheraoed. So it is clear who is carrying out these attacks. From Jadavpur to JNU, they are creating trouble everywhere,” said Saptarshi Sarkar, state secretary of ABVP.

VBU authorities were not available for comments.