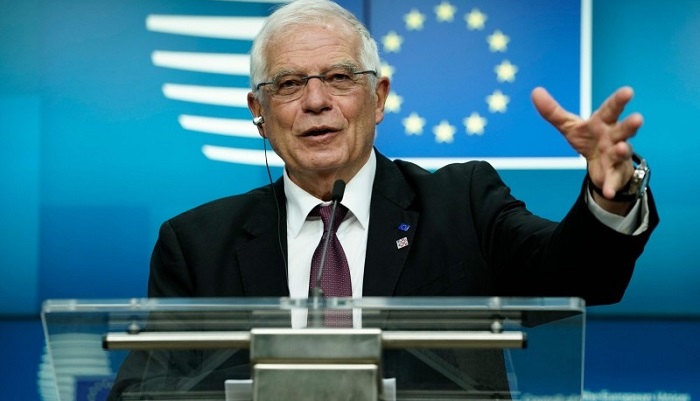 The European Union's top diplomat met Iran's foreign minister in India on Thursday to press Tehran to "preserve" the increasingly fragile nuclear deal, according to a statement released in Brussels.

In his talks with Mohammad Javad Zarif in New Delhi, Josep Borrell warned that the deal was "more important than ever" given rising tensions in the Middle East, the statement said.

The two had "a frank dialogue" in which Borrell "underlined the continued interest of the European Union to preserve the agreement".

The accord between Iran and world powers was struck in 2015 to ensure that Tehran could not develop nuclear weapons.

But the deal has been weakened, first by a US withdrawal in 2018 and the return of sanctions on Iran, and by a series of subsequent retreats by Tehran from its obligations under the agreement.

Heightened military tensions between the United States and Iran, spurred by America's assassination of a top Iranian general in Iraq and a retaliatory Iranian missile salvo on bases used by US soldiers, has put the deal under greater pressure.

This week, European powers France, Germany and Britain said they were triggering a dispute mechanism over Iran's pullbacks.

While that could theoretically eventually lead to a return of UN and EU sanctions on Iran, European officials have made clear that the decision was made in a bid to bring Tehran back into compliance and save the accord.

The EU sees itself as an "honest broker" in the accord's implementation, but takes its lead on Iran's degree of compliance from the UN nuclear watchdog, the IAEA, which continues to monitor Iranian atomic activities on the ground.

Iran has reacted angrily to the European countries' decision. Zarif accused them of having "sold out" what remains of the nuclear deal to avoid new US tariffs on European exports.

His comment referred to a report by the Washington Post saying President Donald Trump's government had renewed a threat to slap a 25 percent tariff on European car exports if the three EU governments held back.

The EU's position is further complicated by Britain's exit from the European bloc, expected in two weeks.

British Prime Minister Boris Johnson has voiced support for the tottering Iran nuclear accord to be replaced by a "Trump deal" -- something France and Germany do not see as possible given Tehran's steadfast refusal to negotiate with the US.

"Those who want to kill this agreement, claiming that they can negotiate a better one -- better for whom? -- should bear in mind that it took 12 years to negotiate it and that this nuclear deal succeeded in making the world a safer place," Borrell said later in a speech at a New Delhi conference on global challenges.

He also slammed "great powers" using trade, technology and currency devaluations as a "weapon" to bend other nations to accept their foreign policy objectives.

Given the breakdown of the multilateral system, he said, "Europe needs to be more assertive... otherwise the law of the jungle will prevail."