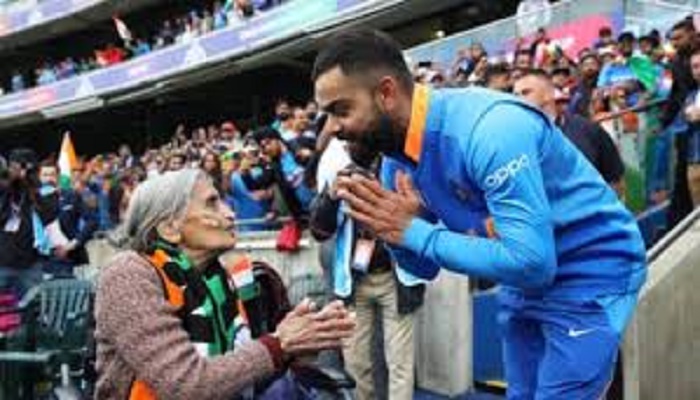 Charulata Patel, the 87-year old lady who garnered overnight attention all across India during the 2019 cricket world cup passed away on January 13.

The superfan was the toast of the entire nation when she went to the stadium to see Team India’s match against Bangladesh. Such was her enthusiasm that it impressed even the Indian team as both Virat Kohli and Rohit Sharma went up to her to seek her blessings.

Charulata Patel’s official Instagram profile confirmed the news of her passing away.

The Tricolour scarf was wrapped around her neck and her indomitable spirit screamed out her enthusiasm and underlined the passion of cricket and the emotions the game brought out from the fans.

Former England captain Michael Vaughan who took to Instagram to post it as “the picture of the World Cup”.

“It is with a heavy heart that I inform you, our beautiful grandmother took her final breath on 13/01 at 5.30 pm.

She was even present at Headingley, Leeds as she cheered for Kohli and company in the match against Sri Lanka in the final game of the group stage. Virat Kohli had promised match tickets for the 87-year-old after India’s previous encounter with Bangladesh, a gesture that was hailed by fans and former cricketers.

The adorable fan had been a regular in cricket matches in England. She was present at Lord’s in 1983 when Kapil Dev’s side lifted the Cup beating West Indies.