Bangladesh go down 2-0 to Palestine 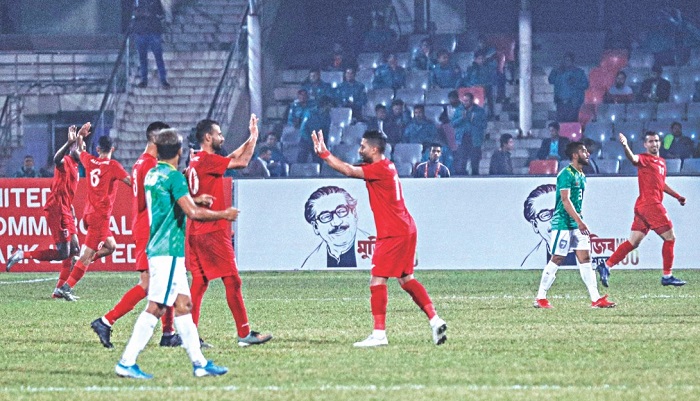 Bangladesh suffered a 2-0 goals defeat to strong Palestine in the inaugural group A match of the Bangabandhu Gold Cup International Football tournament that began on Wednesday at Bangabandhu National Stadium.

With this day’s defeat, Bangladesh’s chance to play semifinal becomes difficult as they must have to win against Sri Lanka in the group the last match on Sunday (January 19) to stay in the championship race. Not only that the hosts will have to look at the result of the Palestine-Sri Lanka match.

Bangladesh went early attack in the 9th minute as Mamunul’s goal bound right footer angular shot from the top of the D box was fisted by Palestine goalkeeper Tawfiq for safety.

Palestine, however, went ahead in the 28th minute of the match. Following a counter attack as Oday Kharoub taking the ball ran down from the mid field and provided to pass to striker Khaled Selim who sailed the ball home with a feeble shot finding the Bangladesh custodian Ashraful helpless under the bar (1-0).

Two minutes later, Bangladesh had chance to restore the parity but referee whistled Topu’s close range header for off side.

After the lemon break, Palestine came to the field with more organised way and doubled the lead in the 58th minute. Forward Layth Kharoub after receiving a long pass from Mohamed Darwish, sent the ball home with a right footer shot from close range giving no chance to Bangladesh goalie Ashraful under the bar (2-0).

Compared to Palestine, Bangladesh got number of chances in the first half but failed to convert any of those into a goal.

However, Bangladesh tried hard to stage a fightback in the second half but all the efforts went in vain in front of Palestine’s packed defence.

After the match, Bangladesh head coach James Day said boys played well but they lost the match for some mistakes.

He hoped the boys would come out strongly in the second match against Sri Lanka.

Palestine assistant coach Fahad Aten said they are very happy to win the first match and hoped to maintain the consistency in the remaining matches.