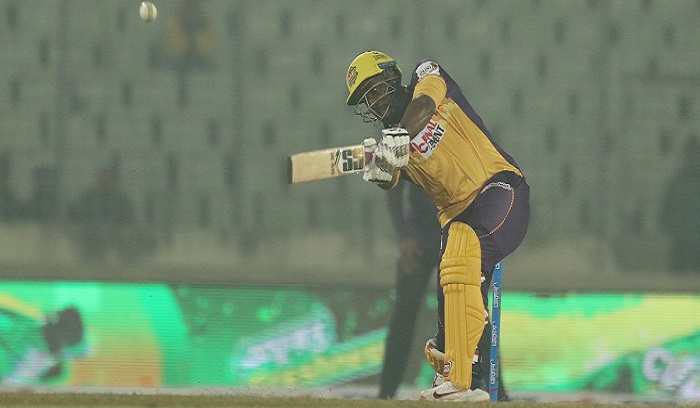 Andre Russell’s unbeaten sensational 22 ball-54 helped Rajshahi to get into the final that trumped his compatriot Chris Gayle’s marauding 24 ball-60.

Gayle’s first half-century in the tournament after three poor innings in the last three matches, helped Chattogram compile a decent 164-9. It though not looked daunting, Rajshahi Royals batsmen dug their own graveyards to take the side closer to defeat.

But Captain Russell came up all guns blazing to rescue the side from the hopeless situation as Rajshahi reached the winning target with four balls to spare.

In his match-winning knock, Russell smashed two fours and seven sixes, last of which sealed the deal.

Rajshahi will take on Khulna Tigers in the final on Friday, which will also be their chance to take avenge on their defeat in the first Qualifier.

Rajshahi was reduced to 14-2 after losing Afif Hossain (2) and Liton Das (2) in the third over and the situation further worsened when Chattogram captain Mahmudullah Riyad got the better of struggling Alok Kapali (9) to leave them further perilous 34-3.

Shoaib Malik and Irfan Shukkur shared 46 runs but it came at such a slower rate that the asking run rate escalated alarmingly.

Before both Shoaib and Shukkur made up their slower rate, Chattogram claimed both of them in consecutive overs through Ziaur Rahman and Mehedi Hasan Rana. Shoaib scored 14 off 22 while Shukkur made 45 off 42 with six fours.

With 83-5 in 15th overs, it was all but Chattogram’s game. But Russell had the other idea in his mind.

He won so many games in IPL from such crunch situation for his side Kolkata Knight Riders but in this tournament, he was just his shadow. However, he got his mojo back when it mattered most for his side.

With the hope of final remains at a knife-edge, Russell brought up his big shots from the repertoire with such effortlessly that broke down the Chattogram bowlers completely. He was briefly supported by Mohammad Nawaz’s 14 off 5 in which he struck two sixes.

Even though wickets tumbling around him, Russell unfazed by it, kept his nerve, remained upbeat and played all of his shots in clinical fashion to give the side unlikely victory.

After being sent to bat first, Chattogram looked destined for a big total when Gayle gave them a fluent start amid the other batsmen’s struggle at other end.

Popularly dubbed as ‘Universal Boss’, Gayle made his intention clear from the first ball and brought up his half-century off just 21 deliveries.

His fellow opener Ziaur Rahman could make just 6, after being troubled by Mohammad Irfan while informing Imrul Kayes added 5.

After reaching half-century, Gayle looked more threatening but was undone by a straight delivery of Afif Hossain against the play to be dismissed for 60 off 24 in which he struck six fours and five sixes.

Captain Mahmudullah seemed to have amended the loss of Gayle, playing his shots at will around the park. However one shot too many caused his downfall as Mohammad Nazwaz removed him for 18 ball-33 that included three fours and three sixes.

Thanks to Gayle and Mahmudullah, Chattogram kept their run-rate 10 per over from the beginning.

But Nawaz hampered the proceedings, forcing them to struggle for runs after the departure of the duo.

To their dismay, Chattogram succumbed to the pressure and kept losing wickets at regular intervals.

Asela Gunaratne then hit 31 off 25 with one four and two sixes to help Chattogram make their total some sort of decent and it looked match-winning until Russell played typical Russell-knock to gun it down.