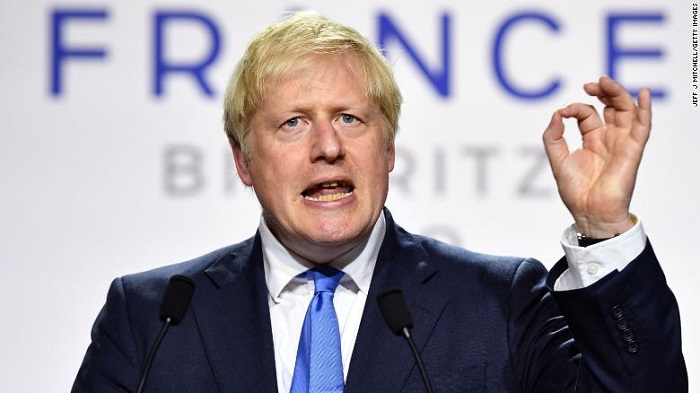 Boris Johnson has said he wants to work with the US and the UK's other allies to replace the current agreement to stop Iran acquiring a nuclear weapon.

The BBC understands the PM believes the current deal has to be made to work in a format that the US would sign up to.

The PM also said a trade deal with the EU this year was "enormously likely".

In a wide-ranging interview with BBC Breakfast's Dan Walker, his first major TV interview since the election, the PM said the two sides would start working on building a "fantastic new partnership" after the UK leaves the bloc on 31 January.

Asked what the odds were of this being done by the 31 December deadline, he said he was "very, very, very confident" although he said in any negotiation a country had "to budget for a complete failure of common sense".

He also said the government was continuing to look at whether Big Ben would chime at the moment that Brexit happens at 23.00 GMT on 31 January. The bell is currently being refurbished and he said it would cost about £500,000 for it to be brought back into use for one night.

"We are working up a plan so people can bung a bob for a Big Ben bong," Mr Johnson said.

Mr Johnson also said he would bring forward a plan for funding care for the elderly before the end of the year.

But he said there were many complex "moral and social issues" involved and that it might take more than four years for it to be implemented.

What the PM said on Iran

In 2018, the US withdrew from the Joint Comprehensive Plan of Action (JCPOA) on Iran, an accord signed in 2015 which agreed to limit its sensitive nuclear activities and allow in international inspectors in return for the lifting of crippling economic sanctions.

Mr Trump has described it as the worst deal ever negotiated, but the UK and its other signatories, China, France, Russia and Germany, are still committed to it.

Speaking to the BBC, Mr Johnson suggested this would remain the case until the agreement was changed.

"My point to our American friends - somehow we have to stop Iran acquiring nuclear weapons. If we're going to get rid we need a replacement.

"From the American perspective, it's a flawed deal...plus it was negotiated by President Obama.

"Let's replace it with the Trump deal. That's what we need to see. President Trump is a great dealmaker by his own account, and by many others.

"Let's work together to replace the JCPOA and get the Trump deal instead."

The BBC's Laura Kuenssberg said she understood the PM was not suggesting that the JCPOA should be scrapped, but that it needs to be made to work in a format that the US would sign up to.

Reuters reported that the UK, France and Germany will inform the EU that they are triggering a dispute mechanism in the Iran nuclear deal following renewed violations by Tehran of the 2015 accord.

The PM said he was pleased that Iran had admitted to a "terrible error" in shooting down an Ukrainian passenger jet, killing all those on board.

He defended the UK's response to the US killing of Iranian general Qassem Soleimani, saying it had played its "traditional role" in working with the US and Europe to de-escalate tensions.

Iran, he said, was an "amazing country" and "should be orientated towards…our way of doing things" but "they are captive to this government".