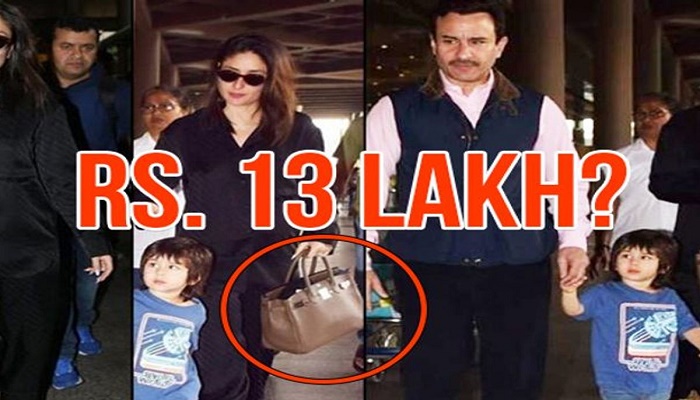 Bollywood actress Kareena Kapoor Khan is one stylish Bollywood mommy, and her recent performance in Good Newwz, alongside Akshay Kumar has been getting some great reviews.

She even rang in the New Year with Virat Kohli, Anushka Sharma, Varun Dhawan and his girlfriend Natasha Dalal, and the group looked super stylish.

Kareena then went to London, from where she returned on Monday.

Saif looked dapper wearing a vest over his pink shirt, Taimur looked adorable as ever in his blue T-shirt, jeans and sneakers but it was Kareena, who looked like a million bucks, literally.

Kareena wore a matching black pyjama-style co-ord set with olive green boots, her sunnies and a gorgeous Hermès Birkin bag. And it comes as no surprise that the bag, the Hermès Birkin 25 Hand Bag Etoupe Togog costs an estimated $18,237 which is approximately Rs 13 lakhs, according to news reports.

However, this isn’t surprising as Kareena has a closet full of expensive bags, including Gucci, Givenchy, Chanel, Fendi, among others. In fact, Kareena has around six Hermès Birkins, that we know of, itself, and the bags in her Birkin collection range between Rs 8-14 lakhs. Which amounts to anything between Rs 50-80 lakhs. Ouch!

Earlier she has been seen carrying a dark brown Hermès Birkin Togo 35 cm which retails for $11,900 or approximately Rs. 8.5 lakh.