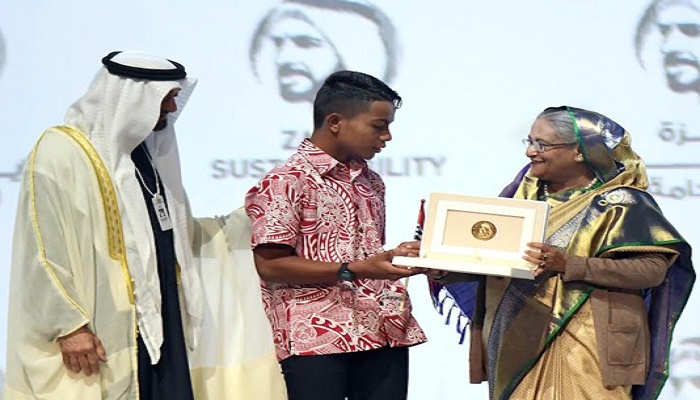 The Abu Dhabi Sustainability Week (ADSW) 2020 was formally opened at the ICC Hall in Abu Dhabi National Exhibition Centre (ADNEC) of United Arab Emirates at 11 in the morning.

The eight-day ADSW 2020, one of the largest sustainability gatherings in the world from January 11-18, brings together a unique fusion of policy makers, industry specialists, technology pioneers and the next generation of sustainability leaders.

On her arrival at the exhibition center, the prime minister was received by Crown Prince of Abu Dhabi Sheikh Mohamed bin Zayed bin Sultan Al-Nahyan.

This year Zayed Sustainability Prize was given to 10 organisations and institutes of different countries under five categories.

At the function, Sheikh Mohamed bin Zayed bin Sultan Al-Nahyan and Sheikh Hasina along with seven other heads of state and government handed over the prizes to the winners.

The Bangladesh Prime Minister handed the prize to the representative of Eutan Tarawa Ieta Junior Secondary School of Kiribati as the school won the prestigious prize under the Global High School category.

The annual awards ceremony is held each January during Abu Dhabi Sustainability Week.

In the afternoon, she will attend an interview session on “The Critical Role of Women in Delivering Climate Action” at Hall-11, the ADNEC.

During the visit, the prime minister will get opportunities to apprise the world leaders of the initiatives taken by Bangladesh in achieving the Sustainable Development Goals (SDGs).

The premier will return home on Tuesday night Bangladesh time.