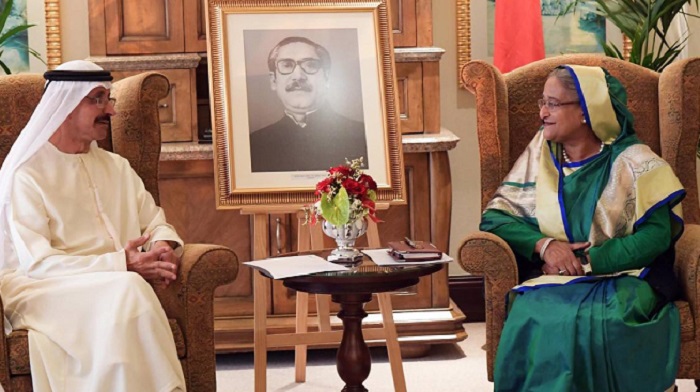 Prime Minister Sheikh Hasina on Monday urged Dubai-based company DP World to come up with investment in port, shipbuilding and ICT sectors of Bangladesh alongside the energy one.

“You can come up with investment not only in the energy sector but also in ports (of Bangladesh),” she said when DP World Chairman Sultan Ahmed bin Sulayem met her at her place of residence in Abu Dhabi.

DP World has taken a venture to set up a 1300-MW power plant in Sonagazi of Feni as the land for the power plant is being allocated to the company, he said.

The firm apprised the Prime Minister of the progress of work on the power plant.

Mentioning that there is huge potential for DP World in the shipbuilding sector in Bangladesh, the Prime Minister invited the Dubai-based company to make investment in the sector.

The company chairman said Bangladesh has progressed much in the ICT sector and it is now the second largest country in terms of outsourcing supply.

Sheikh Hasina said the company can make investment in setting up hi-tech park in Bangladesh.

A Memorandum of Understanding (Addendum to the previous MoU) was signed between the ENOC and the Energy and Mineral Division of Bangladesh during the meeting with the ENOC Chief Executive Officer.

Sheikh Ahmed Dalmook AL Maktoum, member of the ruling family of Dubai, UAE, also paid a courtesy call on the Prime Minister at her place of residence.