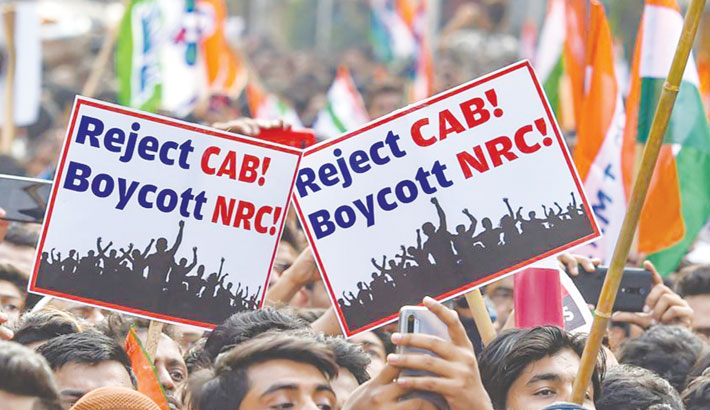 The ruling BJP camp in India is confused about contentious National Register of Citizens (NRC). The pan-India implementation of NRC is next on home minister Amit Shah’s list.

Despite valid documents, the left-out people are facing a challenge to prove their citizenship.

As NRC in Assam invited criticism and outcry at home and abroad, BJP passed another legal instrument, namely Citizenship Amendment Act to grant citizenship to migrated Hindu, Christian and Buddhist people. Political experts, civil society and right groups have found the law to be discriminatory to Muslim migrants.

People of whole India, except BJP, are protesting CAA. Students, rights groups, think-tanks and other political parties are teamed up against the draconian law.

Addressing a public meeting at Jharkhand on November 24, home minister and BJP leader Amit Shah said, “The process of National Register of Citizens (NRC) will be carried out across the country.” None will be able to stop it, he threatened.

The parliament dominated by BJP passed the CAA on December 11 last year. In his address to the parliament, Amit said NRC is his government’s next agenda. President Ram Nath Kovind also gave intimation about NRC.

But, Modi is saying otherwise. In his address in Ramlila Maidan, he said “NRC has neither been discussed in the parliament nor any rules regarding it.”

Now, a question travels in the public mind who is saying the true, Modi or Amit?

People of the country are confused about another statement of Modi that the country is devoid of any detention camp. Such statement made Assam unit BJP leaders smile. A detention camp encapsulating large area has housed around 1,000 people. Suicide and death of inmates without treatment are being reported.

Following countrywide protest, BJP appears to be loosing ground. Muslims with Indian origin or mother need not to be scared of citizenship list, said Modi. Problem is that a Muslim will have to prove that his/her mother is Indian to qualify citizenship test.

He cited a letter sent by Communist Party of India (Marxist) leader Prakash Karat in this regard.

Comrade Prakash Karat, Polit Bureau Member of the CPI (M), allegedly sent a letter to the PM seeking citizenship to all Bangali migrants.  In response to Modi’s statement, Karat claimed that he asked for all migrated people, irrespective of religious identities. Modi made a lie.

BJP leaders are trying to confuse people about CPI (M)’s protest against CAA. They say that CPI (M) protesting CAA as the party does not want Bangali migrants to be granted citizenship.

But CMI (M) rejected the claim saying the party has been working to protect rights of migrated people for long. CPI (M) was the first party to have waged movement for establishing migrants’ right to land, education, employment and citizenship.

In the 20th Congress (2012), CPI (M) passed a resolution to give more effort to secure citizenship of all migrated people.

As part of this resolution, Prakash sent the letter to the PM. Citing the Assam treaty, the letter said the government has an obligation to ensure citizenship and rights of all migrated Bangalis.

The writer is a senior journalist of India.  Translated by Firoz Al Mamun