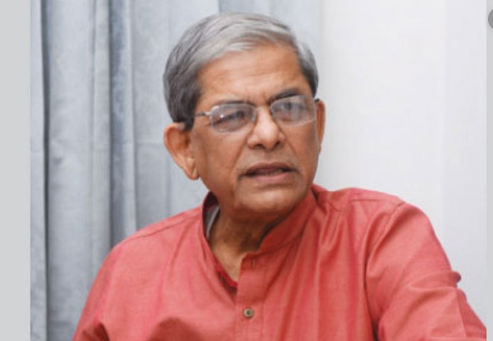 “Resign both as minister and MP and then carry out election campaign in favour of Boat…I’ll do it for the Sheaf of Paddy. Let’s face the challenge and see whom people support,” he said.

The BNP leader came up with the remarks while speaking at a gathering in front of the Jatiya Press Club arranged by Bangladesh Sammilita Peshajibi Parishad demanding the release of BNP chairperson Khaleda Zia and her proper treatment.

Earlier on Friday, Quader raised objection against the restriction on MPs and ministers from carrying out election campaign and questioned as to why he cannot take part in the electioneering when his BNP counterpart doing it.

In response to Quader’s comment, Fakhrul said the law bars the ruling party leader as he is an MP as well as a minister, but “I don’t hold any such post.”

He claimed that ruling party candidates will not be able to win the elections if those are held in a free fair and credible manner.

“Create a level-playing field and establish a neutral government and let the election be held under a neutral Election Commission. We’ll accept the results if such election is held, but you’ll never do it,” the BNP leader said.

He said despite knowing that the government is playing a game in the name of election, BNP has joined the polls as part of their movement for ‘restoring democracy’ and freeing Khaleda Zia from jail.

Fakhrul said Khaleda Zia badly needs advanced treatment as her condition is getting worse gradually. “Her condition has deteriorated alarmingly. Doctors say he needs better treatment at any advanced centre. There’s no such centre in Bangladesh.”