A Unique Innovation of Bangladesh 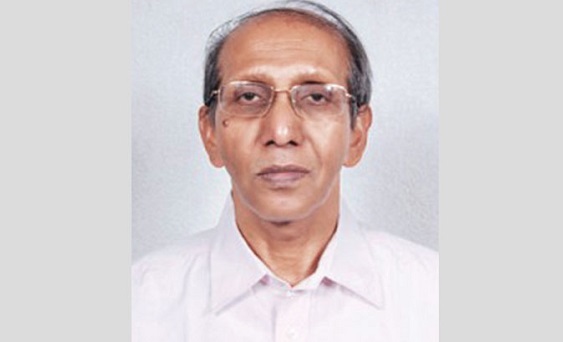 Many farmers of Gopalganj, Barishal and Pirojpur districts of southern Bangladesh are practising floating agriculture in areas having lands under inundation for three to six months during the rainy season. To save the crop loss by flood, instead of trying to conquer the nature, a few local courageous and entrepreneurial farmers wanted to adapt themselves with the nature and made floating rafts or beds with locally available materials about a few hundred years ago, started growing crops on it and placed that on flooded land. Earlier farmers used to make rafts with bamboo, rice stubbles (Nara) and other stubbles, soil, cow dung, etc. to grow vegetables. After the outbreak of very prolific and noxious water-hyacinth during 1960s, instead of using rice stubbles, soil and cow dung, farmers started using water-hyacinth and other aquatic weeds, which after decomposition make good compost fertilizer. As a result, without using chemical fertilizers and pesticides, farmers can produce very coveted organic vegetables desired by the health-conscious people. As urea enhances the decomposition of stubbles, agriculturists are advising to use it for easy and quick decomposition. When plants do not look healthy due to lack of nutrients, application of chemical fertilizers can make plants healthy; therefore, many farmers apply it to get good growth. In that case, vegetables do not qualify for organic vegetables; of course by judicious use of chemical fertilizers and pesticides, it can be made safe.

As crops are grown on soilless media on water, it may be called a kind of hydroponics. In many areas of the country, no crops can be grown due to excess accumulation of water hyacinth, which used to destroy rice crop grown on flooded land. If floating agriculture is extended in those areas, in addition to saving rice crop, vegetables can be grown which is not possible in the area due to lack of high lands.

As growing vegetables on rafts, locally called Dhap, takes less time than growing on soil, farmers can make two to three vegetable crops during the rainy season and make good profit in floating agriculture. In the beginning of rainy season when water hyacinth rapidly procreates, farmers collect mature and big ones for making rafts. Initially a small raft of about a square meter is made by accumulating water hyacinth in step by step on bamboo or wooden structure to make it three to four feet deep. On the top, small water hyacinth, decomposed aquatic weeds, etc. are put to make seed bed. Later water hyacinths are added on two sides to make long size rafts, which may vary from60 to 180 feet long, four to five feet wide and three to four feet deep. To protect the rafts from drifting away by wind or current, these are fixed by bamboo poles in one place and may be moved as per requirement. For raising seedlings, small balls, locally called Dolla, are made by decomposed aquatic weeds in which germinated seeds are placed. Sometime coir dust is also mixed with aquatic weeds to make balls. In many areas women make these and raise seedlings. Seedlings are matured in 20-22 days. Decomposed rafts are used as compost fertilizers for growing winter crops or can be preserved for making raft of next year.

As water-hyacinth is used in making raft, rice and other crops are saved from its noxious effect and mosquito-habitat are destroyed resulting in healthy environment. As rafts are made based on local demand, different types of uses are seen in different areas. In many areas, in addition to growing vegetables, rice seedlings for aman and boro rice are also made on rafts to save time of making seed beds after flood water recedes. This ensures timely planting of rice immediately after flood water recedes.

For making a raft of 60 feet long five feet wide and four feet deep costs about three to four thousand taka and vegetables worth 10 thousand taka can easily be produce in one season. Using high yielding variety seeds, improved technologies and high value vegetables, many farmers earn more than this amount. Usually yields on floating agriculture are more than that grown on soil. Farmers are very happy to adopt this technology as they can get fresh vegetables for their own consumption as well as can sell to meet the household expenditure. In some areas, in addition to growing vegetables on rafts, fishes are also produced, which give additional income. As a consequence of global warming, more areas are becoming water logged in low lying regions. Floating agriculture can be extended to those areas to combat the adverse effects to a good extent.

In 2015, Food and Agriculture Organization of the United Nations (FAO) has recognized floating agriculture of Bangladesh as a Globally Important Agricultural Heritage System (GIAHS) for innovation, sustainability, and adaptability. A team of FAO experts visited Bangladesh to observe the system before giving the recognition.

As floating agriculture has various benefits, government research and extension organizations and local and international non-government organizations are working to disseminate it in different areas of the country. To increase the production of vegetables and spices and to improve the nutritional status, a joint project of Bangladesh Agricultural Research Institute and Department of Agriculture Extension is ongoing in 50 upazilas of 25 districts under eight divisions including haor areas to extend the technology. The technology has already been extended in many new areas and showing good result. As a result of all these activities, it is expected that more farmers having flooded area will be benefited from floating agriculture in respect of food and nutrition aspects and will be able to alleviate poverty.