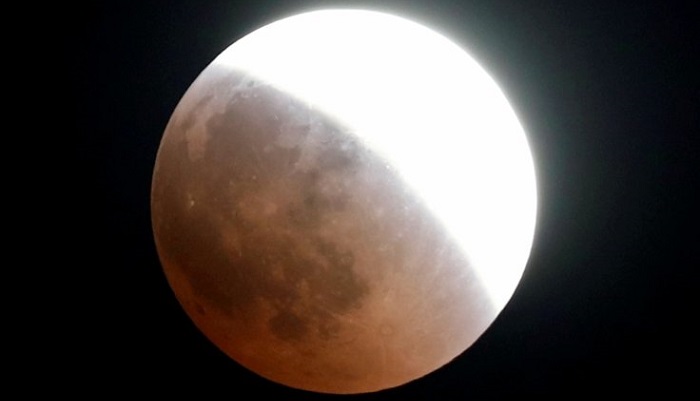 A bright full moon will raise in the night sky tonight – the first of the year and the so-called ‘Wolf Moon’. Weather permitting; it will be visible across the UK from around 7.21pm.

As well as the full moon, skywatchers will also be treated to what’s called a prenumbral lunar eclipse. This is where the Earth’s shadow causes the full moon to look slightly darker than usual.

During a normal full moon, the moon’s surface is reflecting the light from the sun’s rays – but during the lunar eclipse part or all of the Earth may come between the two and block the sun’s light from reaching the moon.

‘A penumbral lunar eclipse occurs when the Sun, Earth, and the Moon are imperfectly aligned,’ explains timeanddate.com. ‘When this happens, the Earth blocks some of the Sun’s light from directly reaching the Moon’s surface and covers all or part of the Moon with the outer part of its shadow, also known as the penumbra.

‘Since the penumbra is much fainter than the dark core of the Earth’s shadow, the umbra, a penumbral eclipse of the Moon is often difficult to tell apart from a normal Full Moon.’

The penumbral lunar eclipse, nicknamed Wolf Moon, will be visible in countries across Asia,Australia, Africa and Europe. According to reports, Western Africa and the Canadian Maritimes can witness the eclipse underway at the time of moon rise, while Australia will see the eclipse during moon set. However, people living in the United States won't be able to see the penumbral lunar eclipse as it will be daylight in that part of the region.