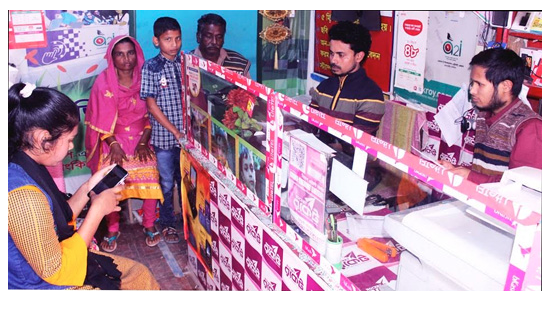 Born in a poor family of village Keshobpur in Saddyapuskorini union of Sadar upazila in Rangpur, Moon, the elder among two sons of his parents, had to continue studies amid extreme poverty.

Talking to journalists, Moon said he passed the HSC examinations in 2006 and started to run after livelihoods for his family members.

“I had to move here and there to earn at the age of only 16 then. My days were passing amid hardship,” he said.

Without losing self-confidence, Moon decided to acquire knowledge on computer and voluntarily joined a digital photo studio in Palichara Bazar near his village. Considering his innovative talent and devotion to work, the studio owner soon appointed Moon and started paying monthly salary. He continued studies along with assisting his family.

“Suddenly, I came to know that one male and another female entrepreneur would be appointed in every UDC when I applied for the post in 2010,” Moon said.

He completed training course on computer, ICT, internet and other digitised activities organised by the National Local Government Institute under the a2i programme.

“Since joining as an entrepreneur at Saddyapuskorini UDC on November 11 in 2010, I started dreaming to contribute to building a digital Bangladesh by realising Vision 2021 as envisioned by Prime Minister Sheikh Hasina,” Moon said.

His entrepreneurship continued to expand with increasing demand of online and offline digitised services.

Moon has already launched two more digital service centres at Palichara Bazar and nearby Noyapukur area and employed seven youths trained by him on computer and digitised technologies.

Moon now pays monthly salaries of Taka 4,500 to 8,000 per month to each of his seven employees working at his three service centres.

The monthly average net income of Moon from Saddyapuskorini UDC and two other service centres stands at Taka 45,000 now excluding Taka 55,000 as establishment costs and salaries of employees.

“The average monthly banking transaction like bcash, rocket, sure cash, nagod, my cash, NRBC, pay well and electricity bill at my Saddyapuskorini UDC alone ranges between Taka 50 lakh and 60 lakh in addition to many other services,” Moon said.

Moon has already trained over 1,000 educated male and female youths on computer and digitised service technologies at his UDC. They now engaged with income generation activities.

Mizanur Rahman, Abdus Sobhan and Rahima Begum of Saddyapuskorini union told BSS that they easily got certified copies of their lost national identity cards from online services at the UDC.

Abdur Razzaque and Monwara Begum said they applied for land ‘Porcha’ from Saddyapuskorini UDC and received the same after only seven working days there.

Appreciating the performance of UDC entrepreneur Moon, Saddyapuskorini union Chairman Sohel Rana said Moon is contributing a lot to transforming every village into a town by providing digitised services to rural people along with changing his fortune.