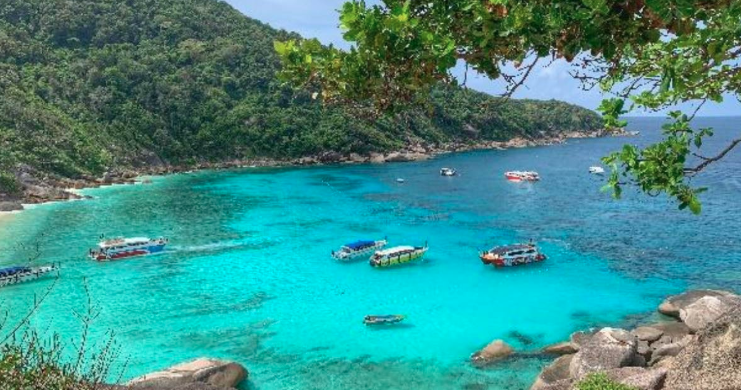 Traveling is an addiction to me. Once you start traveling and get the fun of it, you would want to do it as frequently as possible. There is so much more left to see in this big world. Also, not to forget that there are still numerous countries, cities and places that I had no idea about. This time while researching about my day trip from Phuket, I heard about this archipelago located between the Andaman Sea and the Indian Ocean named the ‘Similan Islands’. The word ‘Similan’ meaning ‘nine’, were initially a group of nine islands but currently two more got added to the list summing upto eleven in total.

My cousin and I booked the day tour including pick and drop to our hostel along with complimentary breakfast, lunch and snacks via an agent named WOW ANDAMAN. We had a 2-hour journey by road to the pier called the Khao Lak Pier followed by a speedboat ride for an hour to reach the Similan Islands. Those who are not used to the boat rocking back and forth were given complimentary motion sickness tablets. We could visit 4 islands in total – two snorkeling points and two beaches.

As we arrived at the office located beside the pier, we saw a huge arrangement of breakfast. There was an enormous variety of food like bread and jam, soupy noodles, chocolate and vanilla cakes and so many others. We were quite impressed with the arrangement. After breakfast, we were briefed about the islands we will be visiting and the DOs and DON’T’s.

Our first stop was in Island No. 9 where we saw this distinct piling up of huge boulders. These boulders are the signature of the Similan Islands, the topmost of which is called the SAIL ROCK. To reach the ‘sail rock’ which is on top of the cliff, we had to go through a nature trail with mini tropical rainforest around it. It took around 20 minutes to reach the top.

The next two islands we visited were snorkeling points. I was amazed to see the crystal-clear water and the distinct shade of blue. While others enjoyed snorkeling, I enjoyed sunbathing on the deck of the speed boat. Our last stop was at island number 4 named Ko Miang where we were served delicious Thai lunch. In addition to this, we also checked out a small sea turtles conservation station. We chilled in the island for some time after which we started our way back to the Khao Lak pier at 3 pm.

I had no idea that the Similan Islands is one of the most popular islands for its diving and white coral sand beaches. I was mindblown by its beauty. The best part was that the place was scenic and deserted at the same time. If you wish to visit the Similans, do visit within mid-October to mid-April when the monsoon season is over.