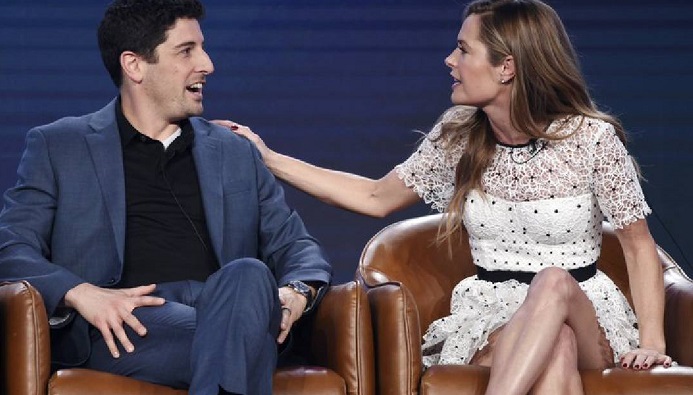 Jason Biggs has no regrets about being indelibly linked to "American Pie," the rowdy 1999 adolescent sex comedy.

"It changed my life, and it's the reason I'm still here and still in the game today," the actor said Tuesday.

Biggs, who played sexually naïve teen Jim in the movie, acknowledged the passage of time can be disconcerting. Biggs, 41, is the grown-up in the room now, playing a family man in Fox's new sitcom "Outmatched," debuting Jan. 23.

"I was the young dude in 'American Pie' and now I'm playing the dad to kids who were born after 'American Pie' came out. It is pretty surreal," he told a TV critics meeting.

Asked if he'd prefer later projects like "Outmatched" to eclipse his role in the teen movie, Biggs demurred.

"Do I hope that this erases anything? Certainly not, I just hope it adds to, and I'm really grateful to be here," he said.

Joining him for the panel discussion were Maggie Lawson, who stars as Biggs' wife, and the youngsters who play their precocious offspring.

Biggs asked teenagers Connor Kalopsis and Ashley Boettcher whether they'd seen the movie (he hadn't, she had) and then turned his attention to grade-school-age Jack Stanton and Oakley Bull.

"I hope you two have not," Biggs said, adding jokingly, "Maybe season three, we're going to have a fun viewing party."

"American Pie," the first in a franchise, was about four youths who make a pact to lose their virginity before the high school prom.