Street food shops a blessing for the poor 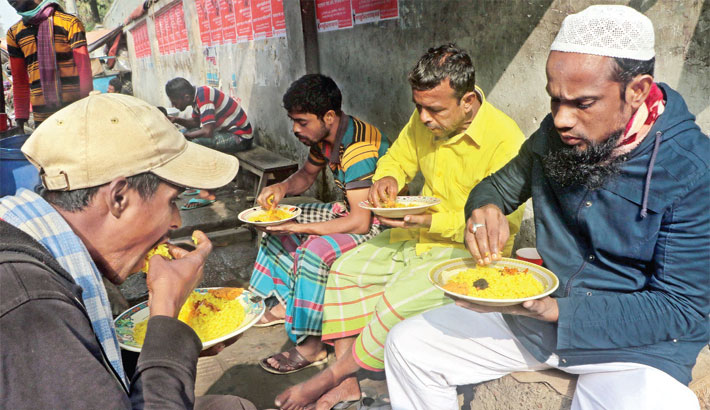 Low-income people, mostly day labourers and rickshaw-pullers, have lunch at a makeshift food shop on footpath in the capital’s Chankharpool area on Tuesday. – Md Nasir Uddin

Mina, a 13-year old girl living in Kamalapur Railway Station without parents, regularly eats at the makeshift food stall run by Peyara Begum in front of the station.

Mina’s mother Moyna died five years ago while giving birth to a child. Her father married another woman. Mina left the family after facing torture by her stepmother.

Mina has been eating at Peyara’s food stall, set up on a rickshaw van, for the last two years. “The food is very cheap here—-each meal costs her Tk 15 to 25,” Mina said, adding that the stall sometimes feeds her free of cost if she doesn’t have any money.

Mina lives in Kamalapur Railway Station along with other five girls and an elderly woman. They also eat out in Peyara Begum’s food stall.

Peyara Begum started selling food seven years ago right after she arrived in Dhaka from Gaibandha after losing everything to river erosion. Her husband works as a security guard for a private company.

“Most of my customers are orphans children living in the Railway Station. The street children, day labourers and rickshaw pullers who can’t afford food in other restaurants or stalls come to my food stall,” Peyara told this reporter.

A meal at her food stall includes one serving of rice or hotchpotch with a low-cost item, such as, curry of chicken skin, leg and liver, or beef fat, or fish egg mixed with vegetables. Her stall usually opens in the evening.

He sells 70 to 80 meals a day at Tk 15 to 30 per person. Customers who are running short of money can even pay Tk 10 for a meal though Peyara makes profits from her stall. “My son and daughter help me in buying groceries and cooking the food,” she said.

Peyara keeps her street restaurant open even if she is sick. “If do not open my stall in one evening, many street children might go hungry on that night,” she said.

Not only Peyara Begum, another four women also operate mobile restaurants in the same areas. Each of these stalls sells meals 60 to 70 customers, especially day labourers, street children and other low-income people.

Similar food stalls can be seen in Karwan Bazaar, Gulistan and High Court area in the city.

NGOs and social workers assume that around 40,000-60,000 low-income and floating people in the city can not afford food even in the cheapest conventional restaurants in most days.

Such temporary food stalls, run by a group of low-income people, are the ideal place for those people to buy food at very cheap prices, they said.