Teens fill car with Koalas to rescue them from Australia bushfires 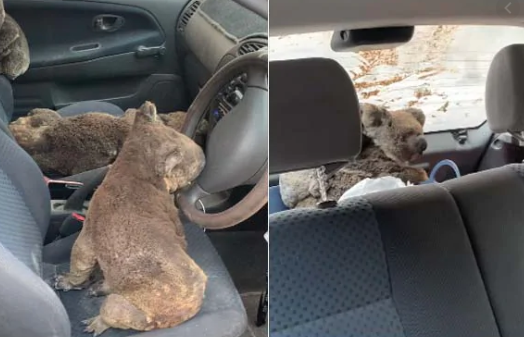 More than 25,000 koalas are believed to have died in the devastating bushfire crisis of Australia. According to The Telegraph, the "virtually unstoppable" fire on Kangaroo Island, which was considered a koala safe-haven because its population had escaped a chlamydia epidemic, has led to grave concern among ecologists. In the midst of this, a video of two teenagers driving around to rescue stressed out koalas has gladdened hearts on social media.

According to Ladbible, the two teens are 19-year-old Micah and 18-year-old Caleb. A video posted on Reddit this Saturday shows them with their car full of koalas rescued from the catastrophic fires. While five koalas lounge on the car seats and the steering wheel, a mother koala is seen in the boot of the car.

The video was posted on Reddit by their cousin, who wrote: "Amid the terrible bushfires in Australia, my cousins went out and saved as many koalas as they could."

Amid the terrible bushfires in Australia, my cousins went out and saved as many koalas as they could. Good on em. Thought reddit would support and appreciate their efforts! from r/HumansBeingBros

The video has been viewed almost 20,000 times, collecting a lot of praise.

"They look so terrified and exhausted. The world needs more people like your cousins," wrote one commenter. "Thank your cousin for saving these sweet babies," said another.

Micah and Caleb estimate that they saved about 20 koalas by driving around the island and putting them in their car. They said that they only took animals that looked most stricken and reported that around 60 percent of the koalas they came across had burned to death.

The two plan to look after the rescued koalas until they can be returned to the wild.

Sam Mitchell, co-owner of the Kangaroo Island Wildlife Park, told Guardian Australia that "probably more than half" of the island's koalas would have perished in the fires.

Heartbreaking pictures of Australia's native wildlife - including koalas and kangaroos - succumbing to the fires or walking up to firefighters for help have emerged as a symbol of the devastating toll of the bushfires in the country.