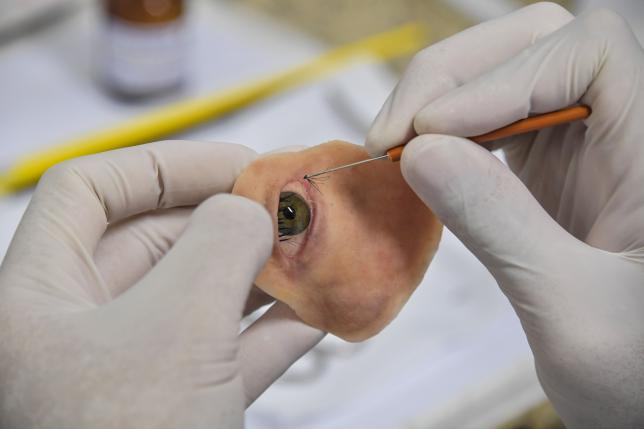 Denise Vicentin looks in the mirror and bursts into tears.

After losing her right eye and part of her jaw to cancer, the Brazilian woman is getting a new face thanks to a digitally-engineered prosthesis.

"Today I can say how much better I will feel being out in the streets. I have no words," Vicentin, 53, tells AFP at a clinic in Sao Paulo after being fitted with a prosthesis for a missing chunk of her face.

The pioneering method has slashed costs and halved production times.

"In the past, it took much longer work, hours of sculpting by hand, and the process was very invasive, with material on the patient's face to get an imprint of their appearance," says Rodrigo Salazar, the lead researcher.

"Today with cell phone pictures, we create a three-dimensional model."

Vicentin is one of more than 50 patients treated by Salazar and his colleagues since 2015.

The team specialises in maxillofacial prosthetics, a branch of dentistry focused on treating people disfigured by birth defects, disease or trauma.

Their technique was published in 2016 in the peer-reviewed Journal of Otolaryngology - Head & Neck Surgery.

AFP has followed Vicentin's journey for more than a year and a half, documenting the various stages of her physical and psychological recovery.

Her ordeal began 30 years ago when she developed a facial tumor. It was removed twice, but it returned in a malignant form two decades later.

Gradually, she lost parts of the right side of her face -- along with her marriage and her dignity.

"When I was on the metro or train, I tried not to pay attention to the stares," Vicentin recalls.

"At places like the bowling alley, I felt them looking, and the person would even leave when they saw me."

Vicentin has difficulty eating and her speech slurs because of the loss of her jaw. Her daughter, Jessica, acts as her interpreter.

As 3D printing developed in recent years, Luciano Dib -- one of Salazar's supervisors and a co-researcher -- got the idea to use the technique for prosthesis models.

"I saw people at the mall do 3D printing, so I thought, 'Why can't we use that for prostheses?'" he says.

Dib implanted titanium rods in her eye socket to hold the prosthesis.

Over the next year, she underwent multiple surgeries to build up her facial tissue.

Using a smartphone, Salazar took 15 pictures of her face from different angles, which were used to make a three-dimensional digital model.

Using that model, a graphic designer created a mirror image of the healthy half of Vicentin's face.

Technicians then 3D-printed a prototype prosthesis which they used to make the final one from silicone, resin and synthetic fibers.

To make the prosthesis as real-looking as possible, Salazar and his colleagues carefully matched its colouring to Vicentin's skin and blue-green eye.

The process for making the final prosthesis took 12 hours -- half the time of conventional methods.

But it was spread out over a year because of Vicentin's surgeries.

She received the completed prosthesis in early December. The small egg-sized piece fit perfectly, with magnets clipping it to the titanium implants.

Conventional techniques for making prosthesis models involve equipment costing up to $500,000, he says. Their method requires a computer and a smartphone.

"The method demonstrates that you don't need big investments to use advanced technology," Salazar says.

Next year, Dib and Salazar plan to open a treatment center for facial prosthetic rehabilitation built by Paulista University and a non-profit organisation which they founded, called Plus Identity.

"In a very short time, we will be able to assist the patient on the spot with a printed prosthesis," Dib says.

For Vicentin, the journey is not yet over. She needs further treatment to restore her jaw and top lip.

But for now, she is overjoyed.

"It was a long time looking at a face which was missing a piece, so I am so happy," she tells AFP after spending her first night at home with the prosthesis.