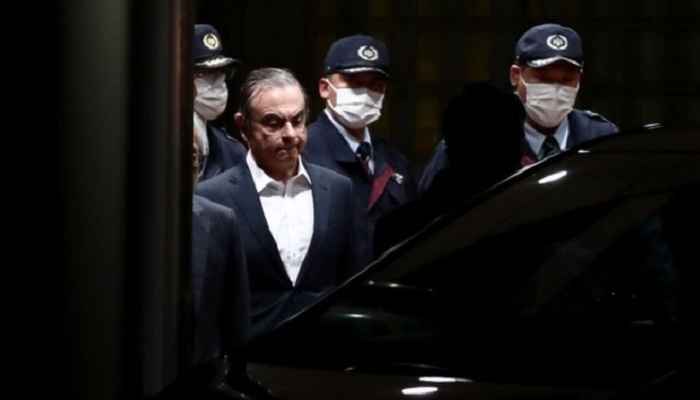 Japan is pressing Lebanon to return fugitive ex-Nissan boss Carlos Ghosn, who escaped house arrest in Tokyo before reportedly being smuggled out of the country in a flight case.

Lebanon does not typically surrender its citizens but Japan says it can request his extradition.

According to reports, Mr Ghosn walked out of his house on 29 December before boarding a bullet train to Osaka.

He was then bundled into a flight case, which was put on a Turkey-bound plane.

Mr Ghosn, who ran Nissan until he was arrested on charges of financial misconduct in November 2018, was banned from seeing his wife while on bail.

But, in the final days of 2019, he skipped bail to board a private jet that took him to Turkey before he travelled on to Lebanon, where he is a citizen and where his wife was waiting.

Security cameras caught the 65-year old walking out of his house in Tokyo alone at around 14:30 local time on 29 December, according to Japanese media.

He reportedly then met two men at a Tokyo hotel who escorted him to the city's Shinagawa station where they caught a train to Osaka, Japan's second city.

There, the three men checked into a hotel near Kansai Airport, the reports said.

Mr Ghosn was not seen leaving the hotel but the two other men were caught by security cameras exiting with two big boxes, according to the reports.