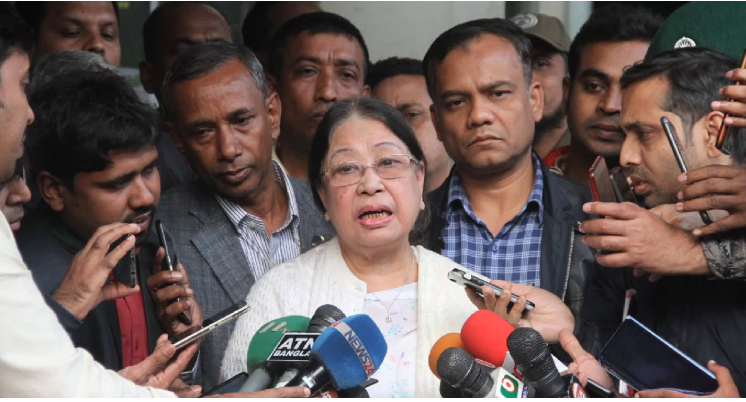 BNP Chairperson Khaleda Zia’s sister Selima Islam on Sunday alleged that the government is conspiring to kill the former prime minister in jail by depriving her of bail and treatment since her condition is ‘deteriorating fast’.

Talking to reporters after meeting her sister at Bangabandhu Sheikh Mujib Medical University (BSMMU), Selima said Khaleda urged all to pray for her recovery.

“Her (Khaleda’s) health condition is very critical. Her sugar level is now 18 during fasting. She’s been suffering from acute pains in her hands and legs. The condition of her left hand turned worse,” said the BNP chief’s sister.

Selima further said, “It seems they (govt) are plotting to kill her by not giving her bail. She’s in such a worse condition that she’s now unable to sit and stand up. The other day she has almost collapsed.”

Voicing deep concern, she said how long Khaleda will survive in such a condition. “They’re pushing her towards death by depriving her of bail. She now needs treatment, but she’s not receiving that much treatment here (BSMMU). How will she survive without proper treatment?

Selima claimed that her sister’s condition worsened further than what they saw last as her hands and fingers got bent. “She also can’t move due to serious pains in knees. Her knees also got swollen.”

She said Khaleda is having trouble to speak, and she cannot eat anything properly due to vomiting tendency.

Khaleda’s sister said doctors visited her today (Sunday) and gave medicines. “But the medicines are not working. She now needs advanced treatment.”

Asked whether Khaleda told them anything about her bail, Selima replied in the negative. “What can she say about it?”

Replying to another question, she said their family members want to send Khaleda abroad for better treatment and it is now very necessary for her.

Selima alleged that the jail authorities are not giving them permission to meet Khaleda after a regular interval as per the jail code. “She feels good when we come to her.  But we don’t get permission to visit her. We’re allowed to meet her after one month or one and a half months.”

Khaleda has been in jail since she was convicted in Zia Orphanage Trust corruption case on February 8 last year. She was found guilty in another corruption case later the same year, though her party claims both cases are politically motivated.

The BNP chief has been receiving treatment at the BSMMU since April 1.