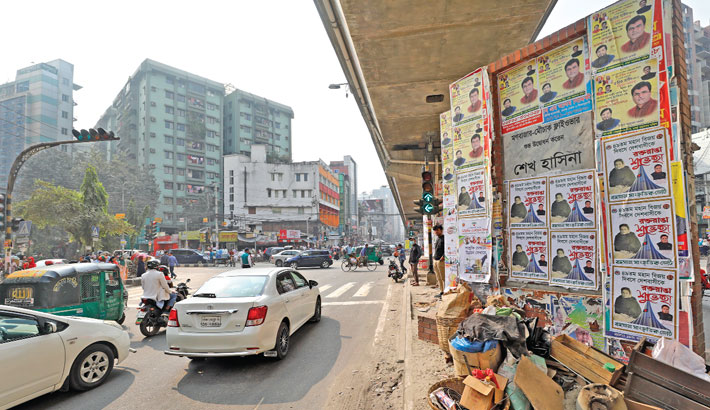 Organisations and individuals have pasted posters on the Prime Minister’s inauguration plaque of Moghbazar-Mouchak flyover in the capital, giving it an ugly look. The photo was shot on Saturday. —Kamrul Islam Ratan

Posters, banners and festoons are being pasted along with graffitis indiscriminately on the walls of different public and private establishments ignoring a law which is hurting capital Dhaka’s beauty.

Even the Prime Minister Sheikh Hasina’s name plaque on the Moghbazar-Mouchak flyover has not been spared.

The posters of Sheikh Shah Alom, who claims himself to be the founding president of Bangamata Sangskritik Jote, fully covered the plaque of the premier on the flyover.

The posters of the newly elected general secretary of Dhaka Mohanagar South Unit Swechchhasebak League Tarek Sayeed have also been found pasted there.

They have pasted their posters violating Graffiti Writing and Poster Sticking Control Act, 2012.

When contacted, Tarek Sayeed said, “My followers might have pasted the posters there without my knowledge. I will remove it now that you have informed me.”

When contacted, Dhaka South City Corporation (DSCC) Waste Management Officer Khandakar Milliatul Islam said, “A section of people do it due to lack of commons sense. We remove the posters in one side while it is being pasted on the other side.”

A lot of cases have been filed against the offenders but they are yet to correct themselves, he said.

“As you have complained, I will send our men to look into it,” he also.

When asked if DNCC strictly enforces poster control act, he said, “We will take measures as per requirements. All are equal in the eyes of law.”