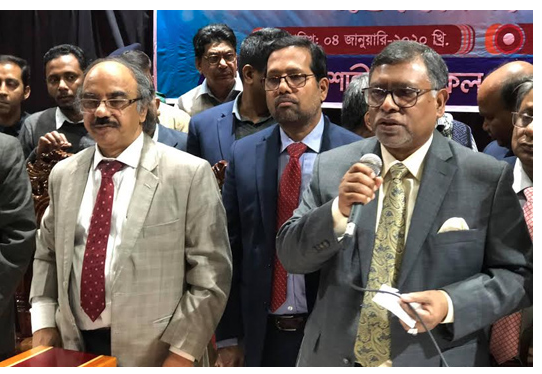 Health and Family Welfare Minister Zahid Maleque, MP,  asked the doctors and others concerned to discharge their duties with utmost sincerity and honesty for the welfare of the public in general.

“We want all people get their respective healthcare services properly and the doctors are the key players to this end,” he added while sharing views with all levels of doctors at Rajshahi Medical College (RMC) auditorium as chief guest.

Zahid Maleque said the present government under the dynamic leadership of Prime Minister Sheikh Hasina has attained a remarkable success in healthcare services.

He said Prime Minister Sheikh Hasina has become vaccine hero this year by the United Nations only one in the world as recognition to the country’s achievements in health sector.

In response to some demands placed before the minister for further improvement of RMCH and RMC he told the audience that all the existing demands will be fulfilled within near future.

All the existing units of CCU, ICU and dialysis in RMCH will be doubled side by side with enhancing its bed number to 1000 more.

“We will take immediate steps to elevate the existing four-storey building to ten-storey and start the dental college,” he added.

Minister Maleque said the government will ensure all requisite facilities in phases but desires better health services as Prime Minister Sheikh Hasina personally is very much sincere to the health sector. He said implementation works of the Rajshahi Medical University (RMU) establishment project is expected to start within this year.

Earlier on, the health minister visited the proposed site of RMU.