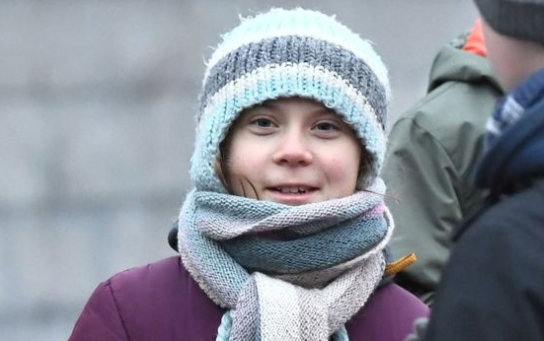 Greta Thunberg has changed her name to Sharon on Twitter, in honour of a game show contestant who appeared to have no idea who she was.

A clip of her answer - and host John Humphrys' deadpan response - has been viewed more than five million times.

The video soon made its way back to Ms Thunberg herself, and on Friday afternoon she changed her name on Twitter.

Thunberg also changed her bio to reflect that she has turned 17 - as Friday was also her birthday.

She celebrated her birthday by going to the weekly Fridays for Future climate protest outside the Swedish parliament building in Stockholm.

Thunberg has been known to have fun with her Twitter profile.

Last month, US President Donald Trump tweeted: "Greta must work on her anger management problem, then go to a good old fashioned movie with a friend! Chill, Greta, Chill!"

In response, Ms Thunberg edited her bio to say she was "a teenager working on her anger management problem. Currently chilling and watching a good old fashioned movie with a friend".

Earlier that week, she changed her bio to say she was a "pirralha" - the Portuguese word for brat - after Brazilian President Jair Bolsonaro criticised her for highlighting the plight of Brazil's indigenous people.

"Greta's been saying Indians have died because they were defending the Amazon," Mr Bolsonaro had told reporters. "It's amazing how much space the press gives this kind of pirralha."

In October she changed her bio to "a kind but poorly informed teenager" - which was exactly how Russian President Vladimir Putin had described her at a conference in Moscow.

In September President Trump posted a video of her speaking emotionally at the UN conference and sarcastically commented: "She seems like a very happy young girl looking forward to a bright and wonderful future."

She changed her bio accordingly: "A very happy young girl looking forward to a bright and wonderful future".