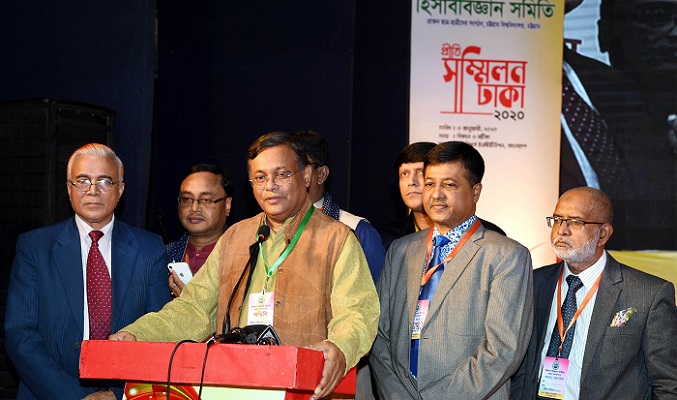 The AL leader came up with this remark while talking to journalists after attending the reunion of Hisab Bigyan Samity (Accounting Association) of Chattogram University at Institution of Engineers, Bangladesh (IEB) in the capital.

“We witnessed how BNP hurled petrol bombs on people, set fire on standing truck when its driver was sleeping inside it, hurled bombs on school-going children during the period of 2013, 2014 and 2015,” Hasasn Mahmud said.

About Mirza Fakhrul’s comment that AL is a terror-based party, Hasan said few days ago BNP carried out terrorist activities in front of the High Court, attacked policemen and vandalised vehicles.

Surrounded by terrorists and being a leader of them, making such comments by Mirza Fakhrul is the biggest farce with the nation, he added.

“I want to say Mirza Fakhrul that Awami League is against terror activities carried out by BNP and their allies,” he said.

Dr Hasan said the comment made by Mirza Fakhrul about AL is applicable for them as “BNP is a party of terrorists and Mirza Fakhrul Islam Alamgir is their leader.”

He demanded speedy trial tribunal for the cases of killing people by hurling petrol bombs during 2013-14.

About BNP’s allegation that the party candidates for the Dhaka city elections could not conduct campaign properly, he said BNP candidates can work freely and the Election Commission is supervising the matter.

Dr Hasan said the EC will hold the elections and since announcement of elections schedule, the jobs of all government employees related to the election process came under the EC.

He said BNP does not participate in election to win rather they want to make the elections controversial.

“In 2018 general election, BNP did not join election to win rather they wanted to make it controversial. Now they are also doing so,” he said.