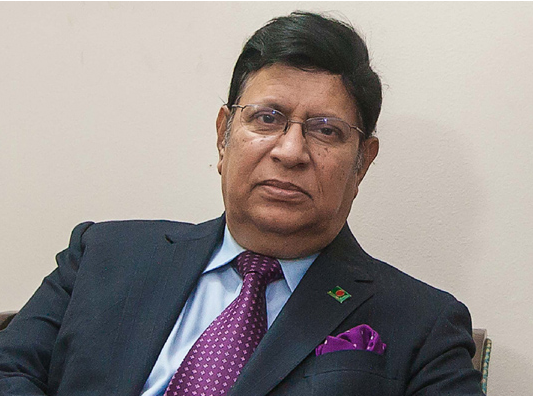 Foreign Minister Dr A K Abdul Momen has directed all Bangladesh envoys abroad to carry out strong diplomatic efforts for keeping up duty-free access of Bangladeshi products to their respective host countries even after Dhaka’s graduation from LDCs (least developed countries) list.

In a letter, recently sent to all the missions, Momen also directed the envoys to keep Bangladesh’s export growth intact through talks with their respective host country’s government, policy makers and importers, a foreign ministry press release said here today.

He asked the missions to play more active role in exploring potential new markets to export readymade garments, pharmaceuticals and agro-products from Bangladesh.

“We need to be more dedicated to increasing overall investment and export growth so that we can achieve the ‘Vision 2021’ and ‘Vision 2041’ under the leadership of the Prime Minister (Sheikh Hasina) before the stipulated timeframe,” he wrote.

He said the Bangladesh government along with all its stakeholders is working relentlessly to offset propaganda.

Momen directed Bangladesh missions abroad to remain aware about such campaign as well as take immediate action, if any such situation occurs.

Side by side, he hoped that the missions would take necessary measures in their respective host countries to portray the Bangladesh government’s various steps taken for overall development of garments industry.

He said the missions can play an important role in bringing more investment here by informing foreign investors about the Bangladesh government’s investment friendly policies and incentives.