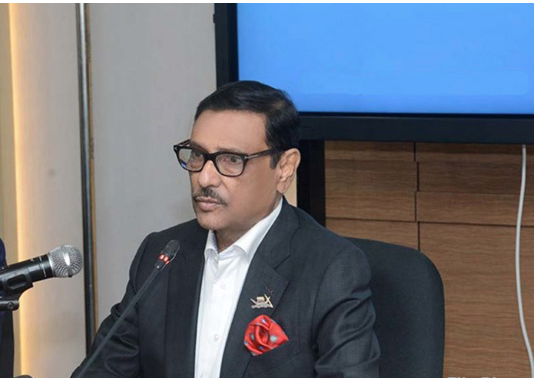 Awami League General Secretary and Road Transport and Bridges Minister Obaidul Quader said it is an old habit of BNP that the party always loses before elections.

“BNP spreads propaganda centering elections until the votes are counted. The Dhaka south and north city corporation elections will be free, fair and neutral. The government will help the Election Commission,” he told a press conference on contemporary issues at his ministry office in the Secretariat .
Noting that AL leaders and activists at all levels will work for the party nominated candidates to ensure win in the two Dhaka city corporations’ elections, Quader said, “The two Dhaka city corporations’ elections is a challenge of the new year. AL is ready to accept the result whatever it will be”.
Replying to a query from a journalist, the AL general secretary said there is no reason for BNP to be hesitated over the city corporation elections.

“BNP leaders are making different comments about the Electronic Voting Machine (EVM) system. Fair elections are being held in different countries, including India, using this (EVM) system,” he said.

Replying to another question, Quader said, “No opposition party in any country of the globe admires the government… we think if the opposition becomes stronger, the democracy is strengthened more”.

Noting that implementation works of Padma Bridge and metro rail projects are progressing fast, the minister said, “Implementation of the undertaken projects, including election pledges’ is a challenge for us. We will realize the commitments which we made for the public interest”.