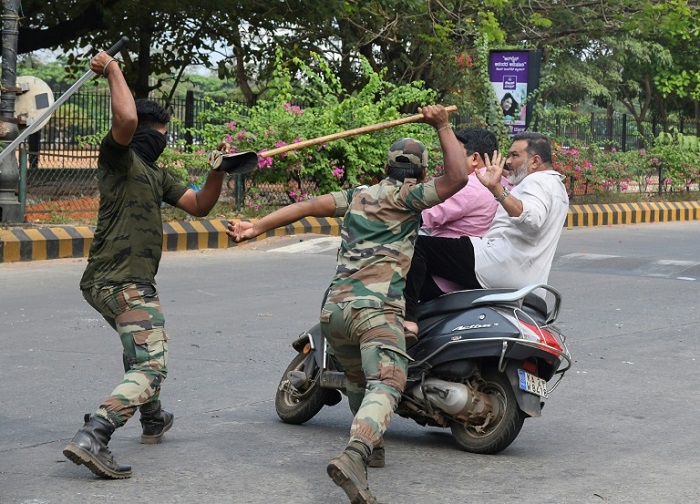 As Indian protests against a new citizenship law have intensified, so has police use of "lathis", sturdy sticks used to whack, thwack and quell dissent since British colonial times -- to sometimes deadly effect.

At least 27 people have died in the past two weeks of protests, mostly from bullets, but hundreds more have been injured in clashes between demonstrators and riot police wielding the bamboo canes.

Images shot by AFP and other media of officers hitting people with them, in some cases apparently indiscriminately lashing out at passers-by and even minors, has only fuelled public anger.

One video of a group of Muslim women in New Delhi protecting a cowering male fellow student from a police lathi barrage spread like wildfire on social media in India.

Those who have experienced a blow from a lathi, measuring five or six feet (1.5-1.8 metres) and made of stout bamboo or plastic, say it leaves a numbing sensation that lasts for days.

Multiple strikes can break bones, cripple and even kill.

"From being used as means to regulate crowds, lathi has turned into a lethal weapon," said V. Suresh, the secretary general of the People's Union for Civil Liberties (PUCL), a non-profit rights group.

"It is... being freely used, so much so that as a country we have become inured to it. Lathi is seen as a normal but it is a horrible weapon," Suresh told AFP.

"Nothing legitimises its brutal use."

Many believe the lathi originated as a martial arts accessory in South Asia. It was also used by feudal landlords against poor peasants, emerging as a symbol of unquestioned power and authority.

In India, the weapon began to inspire fear and awe when the British used it unsparingly to disrupt protest marches that defined the non-violent independence movement in the late 19th and early 20th century.

The British even came up with lathi guidelines that included commands such as "jabbing", which meant hitting people in the gut, and "cutting", denoting a blow to the neck and head.

"The lathi is a legacy of the British colonial rule," said Syed Ali Kazim, an assistant professor of history at Aligarh Muslim University.

"There is clear historical evidence that (freedom fighter) Lala Lajpat Rai died because of the lathi blows on his head during a protest against the British," he told AFP.

The British left in 1947 but the lathi stayed in use, and not only for the security forces.

"Lathis are not regular sticks. The cane is soaked, dried and then oil is applied to it -- it goes through a treatment process to make it a deadly weapon," said Suresh from PUCL.

"They also put iron or steel at the tip which tears the flesh. It can maim and kill."